Getting the Call with Sarah Janian

Many authors frame their origin story in childhood.  They describe epic novels scrawled in notebooks, or a sense of knowing they were predestined for the glorious (cough) work of authoring.

Not so for me.  I was an avid reader, but I avoided creative writing at all costs, until I became an elementary school teacher and had to teach it.  At first, I felt like a fool and a charlatan, but eventually, this work of helping children find their voices helped me to find mine.

A science fiction premise came to me one day, one I thought had a strong enough hook to be worth the toil of turning it into a novel.  So I sat down to write it six years ago, thinking I would have it agented and sold in a year.

In a turn of events that will shock no one, I struggled with the logistics of an 80ish k novel, since the longest thing I had written post-grad school was a short story for my class.  So after a couple years of writing and rewriting, I decided to hold off on the SF and try my hand at a middle grade fantasy.

That manuscript wrote itself in a few months, and I enthusiastically pitched it at several SCBWI conferences over the next couple of years.  In each case, agents gave me the same feedback: “There’s a lot to love here, but this book isn’t publishable.”

I complained, I cried, and I sulked, but then I tried again, this time writing a contemporary MG about a girl struggling with her parents’ bitter divorce.  Although the subject matter is realistically dark, I infused it with humor and lighter moments too.  I was really excited about it.

Then I got pregnant, and I became very, very sick for almost a year.

Then I had a colicky baby and became very, very sleep-deprived for another year.

Writing went out the window during these years.  One day I realized that the vague depression and gnawing angst I was feeling, in part, was because I hadn’t made it a priority.  Armed with the MG partial-manuscript, I started setting my alarm to 4:30 (am) and writing in the mornings.  It was liberating!  It was intoxicating!  Sometimes it was excruciating.

But I did it.  I finished the manuscript when my daughter was about a year-and-a-half, even though my husband was working long hours and we didn’t have any babysitting help at the time.

Just as I finished the book, now tentatively titled THE SIXTH GRADER’S GUIDE TO DIVORCE, I happened upon an announcement about a contest called Query Kombat.  It looked brutal—each query is pitted against another and judged publicly—but it seemed like a great opportunity if I could make a team.

I should admit something here.  In hindsight, I probably wasn’t ready to enter. Unbeknownst to me, my manuscript had some issues, because back then I didn’t know about critique partners or beta readers.  It was just me and my screaming toddler and my computer.

And coffee.  Lots and lots of coffee.

I wrote a query right before the deadline, sent it to Michelle, and stalked Twitter.  Oh yes, I also joined Twitter.  Even though I’m a borderline Millenial, I’ve always felt a bit uncomfortable with social media, but QK convinced me to take the plunge.

I remember reading over the team announcements with my husband, not even breathing.

Making Laura Heffernan’s team was the first real writing victory I experienced in almost six years.  It was amazing.

The contest proved even more brutal than I had realized. I pored over the blogs as the votes rolled in for and against me.  In the end, I advanced through the first round to the agent round, but I was crushed in the second round. The good news: during the agent round I got a bunch of agent requests, another first for me!  I also used the feedback from the QK judges to strengthen my query.
Then s**t got real.

I frantically revised while new QK friends beta read my manuscript.  I also made the very savvy decision to hire Laura outside of QK to do a developmental read of my MS and give me her feedback.

After sending out the full and partials to the QK agents, I began sending small batches to other agents as well.  I sent out a query to Andrea Somberg very early in my querying because her longtime client, Sarah Beth Durst, is one of my favorite authors, and I had remembered Sarah mentioning her in various interviews.

Andrea responded within a few days. (She is a master of her inbox, which is not always the case with agents.)  She said she enjoyed my pasted pages and asked for a full.

My hands literally shook as they read the message on my phone.

At the same time, Laura got back to me with her thoughts, and another agent approached me with some revision ideas.  Just as I sat down to rework, Andrea finished reading the manuscript and loved it.

SHE SAID SHE WANTED TO SCHEDULE A TALK BY PHONE.

I had been reading the blogs enough to know that this is often, but not always, a signal that AN AGENT WILL OFFER.

It was one of the most wonderful and surreal conversations in my life.  Andrea convinced me that she loved my manuscript as much as I did, her editing vision gelled with mine, and her submission plan sounded fantastic.  I also got to speak with Sarah Beth Durst by phone, who proved lovely and gracious and very tolerant of my fangirling.

After that came an insane week of notifying the other agents with my partials and fulls that I had been offered rep.  Not much is written about this because it’s all very hush hush, which is too bad, because you learn a lot about how agents handle things like deadlines and communication.  In the end I had multiple offers and had to make a difficult choice, however one that I have not regretted for a second since signing with Andrea.

Although I did not get my agent through the QK agent requests, I am SO grateful to QK and to the hosts Michelle Hauck, Laura Heffernan, and Michael Anthony.  Because of their generous work making the competition happen, I improved my query, built up the confidence to try again after “failure,” and made some wonderful writing friends.  I want to thank Laura, in particular, for being a wise, funny, and inspiring friend and mentor.   Words cannot express my gratitude to her for her many, many kindnesses. 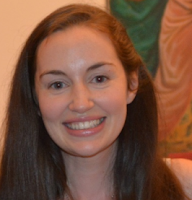 Sarah Janian is a teacher-turned-sahm who earned her B.S. from Swarthmore ('05) and her M.Ed. from Bank Street ('09). Currently she lives in Philadelphia with her family.  Follow her on Twitter @see_sahm_write to win one of her query and MS critique giveaways. Sarah is represented by Andrea Somberg at the Harvey Klinger Agency.
Posted by Michelle 4 Laughs at 8:00 AM