Getting the Call: Amber Leah Brock

If there is one thing to be learned from these posts, it's the value of persistence. I'm glad to welcome a new friend and writer of historical fiction, Amber Brock, who has this quality in abundance. She wasn't afraid of tweaking her manuscript until it sparkled enough to catch an agent. And she also names her picture file "Me" which means we think alike. Her novel sounds like my kind of story, I'll be looking for it on shelves soon. 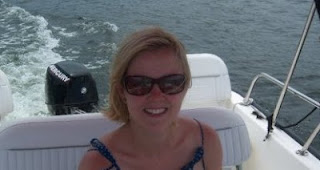 In October 2011, I “finished” my historical novel, Blessed Among Women.  I thought, hey, this is just like what’s in bookstores!  I need to get this to a publisher!  Then I did a little research and found out that you don’t send a novel to a publisher, silly, you send a query letter to a literary agent.  So I sat down to write a query letter.  And boy, did I bomb.  I’m deeply ashamed to admit that I went after some of the top agents in the field with a poorly-written query letter and a 55k word “novel”.  When their assistants got done wiping tears of laughter from their eyes, I got form reject after form reject.

So I dug back into the novel and made additions that enriched the story, and then completely re-wrote the beginning when my beta readers made the comment that it was a good novel “once they got into it”.  To me that said the beginning was too slow, so I concentrated on my strong suit (dialogue) to make the opening punchier.  Then I joined the “Where Past is Prologue” critique group on Agent Query Connect and learned invaluable lessons.

In January I started the querying process again and got my first requests for pages.  Hooray!  Then I got form rejects on pages.  Ouch.  So I set it aside—stepped back, worked on other projects.  I thought I had shelved the novel, but it kept whispering to me from my Documents folder.  I read Writing the Breakout Novel, On Writing, Self-Editing for Fiction Writers and, for the thousandth time, Bird by Bird.  Then I thrashed my novel into submission based on what I learned.  I attacked my query with the same fervor, and then started sending again in March.

I started getting requests—I was still getting rejections, but now they were personalized, with real suggestions to help my novel, and invitations to re-submit.  I incorporated those suggestions and then sent another batch.  If it sounds like I sent a lot of queries, it’s because I sent a lot of queries.  Over 130.  Maybe even way over 130.  130 is when I stopped counting.  If you can’t tell, I’m deeply stubborn.  Plus I had tons of support from my husband and family.  I’m glad I kept going!

So I sent my just-good-enough query plus the first 30ish pages to Clare Wallace of the Darley Anderson Agency (among others—I sent out batches of ten).  Within a couple of days, I got an email from the agency’s editor, the delightful Vicki LeFeuvre.  She and Clare and read the first part and wanted a synopsis and a full on exclusive. When they read the full they approached me with a suggestion for revision that would draw the novel more to the “faction” side of historical fiction (basically, they wanted me to draw in more of the true historical element that inspired the novel).  I considered it, decided I’d give it a shot and see how I felt about the changes.

Well, they’re the experts for a reason.  The suggestions strengthened the novel enormously.  I sent the revision and got an email from Clare a couple of weeks later.  I was actually standing in the grocery store when I opened the email!  She said she wanted to talk about representation.  Let me tell you, there is no better feeling than standing in the frozen foods aisle reading those words.  Several days later my phone was ringing and I was trying to keep my cool.

We talked for about thirty minutes, but I knew immediately that she was the right one.  Her vision for the novel perfectly aligned with mine, and she was excited to hear about the other projects I’m working on.  She sent me the contract later that afternoon.  I haven’t stopped celebrating since!

Author bio:
Amber Leah Brock is a sometime Spanish teacher who moonlights as a novelist.  She lives in Atlanta with her English teacher husband and their three crazy rescue dogs.  Her novel BLESSED AMONG WOMEN is loosely based upon the unique love triangle between Henri II of France, his wife Catherine de’ Medici, and his lover Diane de Poitiers.  You can follow her on twitter at @AmberLBrock.  She whines about writing at allmyfriendsarepretend.blogspot.com.
Posted by Michelle 4 Laughs at 12:38 PM