Who wants some eye candy, ladies? I'm so happy to share with you the cover of my friend Lori Sjoberg's debut romance novel, Grave Intentions. This one is on my wish list for Christmas. Aside from holding the first royalty check or the first hard copy in your very own hands, I'd imagine getting the cover art has to be the biggest thrill of a writer's life. This is when it actually starts to feel real, when the truth sinks in--I'm about to be published. So here it is with Lori's words of what the experience was like: 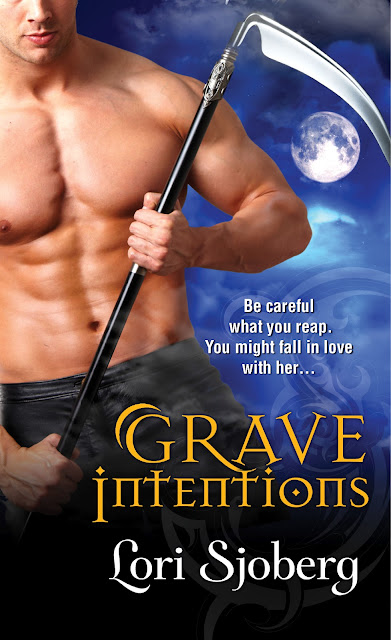 A lot of thought goes into cover art. Not only must it appeal to potential buyers perusing bookstore shelves, but it also has to catch the eye of anyone scrolling through books via online merchants. In a matter of seconds, the cover needs to convey genre and mood in a way that makes the reader think "MUST. BUY. NOW!"

In general, authors have little say about what goes onto their covers. That was the case with Grave Intentions, and I was a little anxious when I finally received the artwork from my publisher . Would I be saddled with a butt ugly cover? Would I be embarrassed if my friends or family found it on Amazon? (As you can see, I'm a glass half empty kind of gal.) I clicked the jpeg with trepidation…and was pleasantly surprised!

All of the necessary elements were present: the scythe to indicate the book is about reapers, the bare-chested man candy to show the novel is a romance, the dark blue background to accentuate said bare-chested man candy, and the vivid text to highlight the title and author. It catches the eye in both full and thumbnail sizes. And most important of all, my name was on the cover of a book! The thrill of seeing that for the first time was indescribable.

One act of mercy before dying was all it took to turn soldier David Anderson into a reaper—an immortal who guides souls-of-untimely-death into the afterlife. But the closer he gets to atoning for his mortal sin and finally escaping merciless Fate, the more he feels his own humanity slipping away for good. Until he encounters Sarah Griffith. This skeptical scientist can’t be influenced by his powers—even though she has an unsuspected talent for sensing the dead. Her honesty and irreverent sense of humor reignite his reason for living—and a passion he can’t afford to feel. Now Fate has summoned David to make a devastating last harvest. And he’ll break every hellishly-strict netherworld rule to save Sarah…and gamble on a choice even an immortal can’t win. 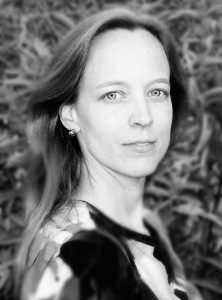 The youngest of three girls, Lori never had control of the remote. (Not that she’s bitter about that. Really. Okay, maybe a little, but it’s not like she’s scarred for life or anything.) That meant a steady diet of science fiction and fantasy. Star Trek, Star Wars, Twilight Zone, Outer Limits – you name it, she watched it. It fed her imagination, and that came in handy when the hormones kicked in and she needed a creative excuse for being out past curfew.
After completing her first manuscript, Lori joined the Romance Writers of America and Central Florida Romance Writers. Now she exercises the analytical half of her brain at her day job, and the creative half writing paranormal romance. When she’s not doing either one of those, she’s usually spending time with her husband and children of the four-legged variety.
Her contact info is: www.lorisjoberg.com
www.facebook.com/AuthorLoriSjoberg
@Lori_Sjoberg (Twitter).