Getting the Call: Lynda Williams

Today I'm happy to bring you an author who actually wrote a short about the despair she felt trying to break into publishing. Now she has not one, but seven books published. That's quite an accomplishment. Here's proof that it can be done and there is a market for a well-developed fantasy series. Welcome to Lynda Williams.

Michelle, I would love to share my "Getting the Call" story with you and your readers and to include the link to my story Going Back Out which I wrote when I was feeling despair about ever being a real writer because I couldn't see how I'd ever compete with the "big guys". The writer-analogy is about Gadar, a Reetion pilot who is depressed to discover Sevolites really do fly harder than she can. But, as Ann reminds her, they don't fly for her reasons and the people she flies for need HER. When you focus on what you are doing, and why, then fears about how loudly you can do it fade away. 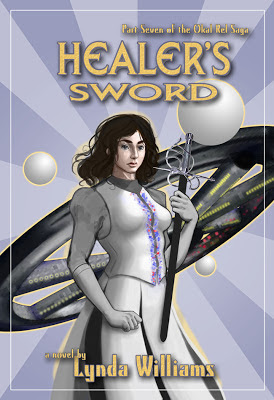 Easier said than done, of course, but I have often re-read Going Back Out myself, particularly when I felt angry about some very loud success that jarred me emotionally for the sake of the implied messages about immoral behavior being okay so long as you win. My own "Getting the Call" message has to be when Edge Science Fiction and Fantasy bought Throne Price. I had sold a couple short stories before but the Okal Rel Saga was my big dream. Alison Sinclair and I sold Throne Price to Edge late in the last millenium. At the time, the "buzz" in the writerly world was all in favor of "shorter, meaner, harder", or at least so it seemed to me. A ten novel saga about the struggle to find the common sense to stop destroying the world, and brutalizing people, in the fight between cultures for dominance, felt like a dark horse. But I had lived and labored in the Okal Rel Universe for thirty years. I wasn't interested in doing "something else".


Now, a mere 30,000 words shy of completing a ten-novel project, with Part 8: Gathering Storm due soon, I am glad I had the courage to keep flying for my own reasons. And this is what really makes it worthwhile -- so are the readers who love my characters.