Snow and A Little Catch Up 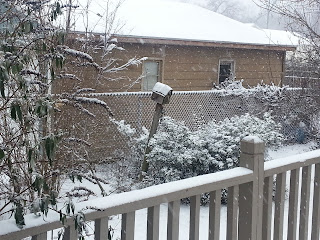 I promised snow pictures for my friends in those warm climates who never see any of the white stuff. (Grumbles under breath about lucky SOB's in warmer climates. You know who you are!) We got our first snow fall on Boxing Day, not that we celebrate Boxing Day, but it's such a cool name. It was only a small amount of snow for us in Northern Indiana, about three inches. I'm sure we will get plenty more. So if anyone wants more pictures, shout out in the comments. I could mail you a few boxes of it, but they'd be soggy. 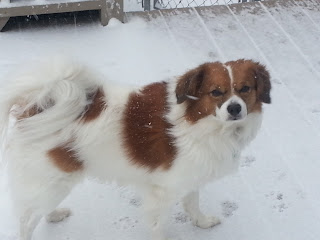 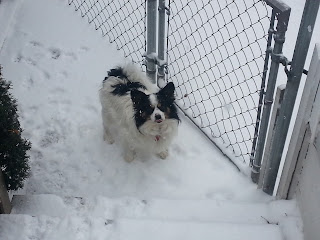 Here are some equal time pictures for my two dogs. The brown one is Robin--not named for the superhero, but for the bow and arrow guy. He doesn't like the wind. The black one is Pippin--yes named for LOTR's Pippin. And he is a pretty princess who doesn't like to get his feet wet. He also wouldn't look at me until I took twenty pictures. My fingers were freezing. You might be able to see Pippin is sticking his tongue out at me.

I did get to see the Hobbit movie. I liked it a lot, but I didn't love it. It seemed like they stretched the material a bit. Three hours is pretty long even for LOTR. We went the Saturday after the tragedy in Connecticut so that might have been on my mind also. I will definitely see it again and maybe it will strike me more favorably. 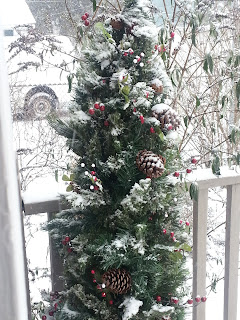 In other news, I'll be starting the contest to win a copy of a Wheel of Time book this weekend, either the Eye of the World or A Memory of Light. I'll let the winner pick which one they want and whether an ebook or a paper version. Not sure whether the post will go up on Saturday or Sunday because my motivation is as uncertain as the weather. So stay tuned for that.

Oh, and Kindar's Cure is now on Goodreads in anticipation of a March 2013 release. I'll probably do another announcement about that. You can friend me here  or add Kindar to your 'to be read' list here. My editor is healing up after some surgery so there hasn't been much movement by the publisher. I wish her well and healthy and back to work soon. I wouldn't be surprised if the release date gets pushed back a little bit which give me more time to prepare.

Happy New Year to everyone.