I hope everyone is surviving the shopping season and having a good time with family and friends. I promised a quick post about how the James Bond movies give a great example of a successful and enduring series. Truthfully, I wanted an excuse to post more pictures of Bond.

The Bond movies succeed because they form a blend of the familiar with the new. They give us what we love and include something we haven’t seen before. 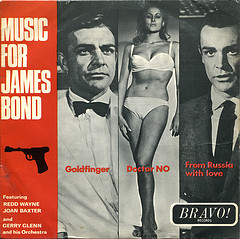 First off, the Bond movies stay true to the cast of characters. They create memorable characters, and they aren’t afraid to reuse them over and over, keeping their personalities intact. Besides Bond, there are M and Q, Moneypenny and Felix. Those characters are the foundation of the series, and it doesn’t matter whether the actors change as long as the characters remain essentially unchanged. 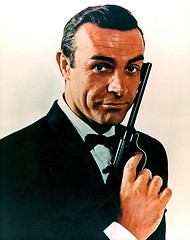 The core plots are always the same as well: A villainous mastermind out to destroy the world, only to be stopped by the physical and mental manipulations of the seasoned spy. Viewers know to expect grand action scenes, culminating in one vast final coupe of explosions and death.

But Bond always blends the known with the new and improved. There are always new gadgets to impress with their technology. New heights to which the action reaches in an unstoppable bid to outduel the last movie.

Thought many characters remain the same, we can always count on new and exciting additions. Almost each movie introduces a new villain. There are new beauties to admire and conquer. 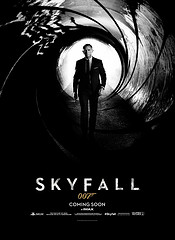 Obviously there is much to be learned for writers about balancing content from previous works while keeping it all new and fresh. The scope should always be trying to be bigger, more impressive. It’s a can’t lose combination.
Posted by Michelle 4 Laughs at 2:03 PM