Getting the Call: Jean Oram

I'm so pleased to mix things up a little after the holiday week and bring you an agented non-fiction writer. The method of getting an agent is a little different for non-fiction where the proposal and your platform are so important, but The Call emotions are the same.
Jean, it sounds like your book and blog would appeal to so many people. Especially in the summer, it is so hard to come up with ideas that get kids involved and away from the electronics. Thanks for sharing your story!

Edit: Check out Jean's post on Questions to Ask a Literary Agent. 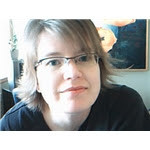 Getting The Call for my nonfiction children's 1,001 play ideas book is a bit of a long, rambling story.


How the Book Idea Came to Be:

When my daughter was about a year old I saw an idea for a bean plant teepee in a magazine. (You grow beans up a bamboo teepee frame to make a mini fort.) My daughter wasn't old enough at the time to enjoy it so I snagged it out of the mag and slapped it in a notebook.

And thus The List began. Within two days I had HUNDREDS of kids play ideas written down. They literally poured into my brain after glueing that one magazine picture in the notebook. My mom laughed and said I was writing a book. At that point I was a school librarian on maternity leave, but not a writer. A book wasn't a bad idea though.

About 700 play ideas later, I typed them up in my computer and queried them straight to a publisher. Yeah. This long list with a few instructions. I got rejected. I shrugged and carried on with life. I had tried. (And I think a part of me knew the book wasn't what it should/could be yet.)

A few years later I got into writing novels. That's when I learned about query letters (what makes 'em good), how to write a bit better (okay a WHOLE lot better), what a literary agent was, etc.

After querying a few novels, I decided… I should give away my list of kids play ideas. So I whipped up a website, put some of the ideas on it and pretty much forgot about it. I didn't even publicize the poor site. I just let it languish. Oh, and I blogged about some of the ideas for awhile. Like, one a day for over a year and burned out.

It all lacked something.

Plus, I was way too chicken to really tell people about my site and get enthusiastic about it all. Way too scared. And I needed to build a platform and put myself out there if I wanted to do this. As well, I still didn't quite know what my niche was. Play ideas, yes. But? There was something missing. And, of course, a part of me (read that: a large, secret part of me) hoped people would magically discover my site and make it that whatever it wasn't.

A Push From Friends:

Around that time a friend in the publishing world, Molli Nickell, encouraged me to query literary agents. She started sending me information on how to write a nonfiction proposal and offered to critique my proposal for me. So, I wrote one. She provided feedback and off it went to agents. I can't recall exactly how many, but it was like 10 or so. It didn't feel right to pursue it at that point.

WEbook came along and I entered some stories and then tried their querying system. I queried some fiction projects and also a few nonfiction queries for kicks. No replies. Again, shrugged and moved on with fiction work and improving my craft. The timing didn't feel right.

By now many years had passed since The List began and I was pregnant with #2. My critique partner and friend, Calista Taylor, was approached by literary agent Neil Salkind of the Salkind Agency after finding her online. He was looking for someone to write a steampunk craft book. (Coming out this fall!) She signed with him and got a book deal in a matter of days and then asked him if he'd be interested in my project. (Got to love friends who believe in you!)

He told her to ask me to send a query. So I sent off a query as well as my (updated) proposal in case he was interested. (Meanwhile I was worried how this was all going to pan out since I knew I could end up on months of bed rest and possible a lengthy hospital stay with this pregnancy--what was I going to do if this whole book thing worked out?)

He was. Within five days we had a signed contract for representation.

Neil replied to my query within a day or two (with apologies for taking so long if you can believe it) and asked if he could call me. That morning he had to delay the call by a few minutes. Why? He was selling a book. (Good omen? I dunno, but I like it!)

It was strange. I wasn't really nervous. I was calm and felt almost like it wasn't real. My mom was over working on the stained glass piece she had made me for my birthday when Neil called to discuss my project. I wouldn't let myself believe that he might offer to represent me.

We chatted for about 10 minutes and in that time he totally pinned my project in the bigger market and what he saw happening in the world of parenting. It was incredible. It was inspiring. It was like someone cranked the shutters on my mind all the way open. (I couldn't believe I hadn't seen this and that he still saw the potential in my lame and misguided query.)

During the call I couldn't think of any questions to ask. And those that I did I ask, I think I asked twice. Everything he said just made sense. Plus he was way ahead of me. He was already brainstorming foreword authors and had a new title in mind. Did I have any thoughts on what we could add to the title?
Um… Uh? Hello brain? Any thoughts?

It was like I had been ambling along down the sidewalk and he'd zoomed by in a speeding a car and grabbed my hand. Problem was my (pregnant) brain was still back there ambling on the sidewalk, struggling to waddle fast enough to leap back into a position where it could do some thinking.

There wasn't much for me to say or to ask, but I felt I had to say something. The call doesn't last 5 minutes! (He offered to represent me in the first five.) And how do you accept? What do you say? What words do you use? I accept you because you complete my project? You are the missing piece?

The poor guy probably thought I was mental. My mind was galloping with all these new thoughts and my mouth felt like it needed to move!

But I didn't gush. I was professional--if a little slow sounding.

The big thing about The Call was this: Neil understood the vision I had for my book. He shared it, but also saw it in relation to what was going on in the world around us. He got it more than I did! And suddenly I could see what my project really was and how it could make a difference in the world.

I went upstairs after the call (still a bit stunned around the edges) and said to my mom, "I think I have a literary agent. I have an agreement to sign." And then I sat down, watched her work on the stained glass on the dining room table. (And later went and made notes, printed out the agreement, signed it, and sent it back.)

It's been a year and a half since The Call. In that time we've come very, very close to a publishing contract in a very crowded and specific market. In that time I have learned A TON! Currently, I am updating my proposal. (Neil provided all sorts of great insight and tips on how to improve that 54 page document for our first go 'round and now I am adding things in that I have done in the past year and a half.) We plan to hit the editors again this fall, if not sooner. Wish me luck!

Thank you Michelle for allowing me to share my story on your blog. And thank you to Neil for all his hard work. Here's to more editor queries this fall!

BIO: Jean Oram is a mother to two healthy kids--and didn't end up on more than a day of bed rest after all. Wahoo! She loves to write and is currently working on breaking into the magazine market to help expand her audience and nonfiction platform. She loves to ski, play, climb trees, read, moderate for her writing friends over on www.agentqueryconnect.com, pin play ideas on Pinterest (www.pinterest.com/jeanoram), talk play with parents on Facebook (www.facebook.com/Itsallkidsplay), tweet funnies and play articles on Twitter (www.twitter.com/kidsplay) as well as blogging about silly play and other great fun things for kids on her website and blog (www.itsallkidsplay.ca). She also has a blog about writing (www.jeanoram.com).
Posted by Michelle 4 Laughs at 10:49 AM