Memory of Light: The Wheel of Time Turns

My favorite epic fantasy series has its final offering coming out January 8, 2013. I’ve been reading it since the first book written by Robert Jordan was published in 1990. That trade paperback edition is falling apart I’ve read it so many times. Now thirteen books later and over twenty years, the final offering makes it way to press in a few months. It’s a sad and exciting thought.
Anybody who had read any of the Wheel of Time series knows that Robert Jordan died with the series unfinished. That his wife and editor, Harriet, handpicked the writer to finish the series. Brandon Sanderson took Jordan’s work and added two more books to the collection. He adapted his style to Jordan’s and made the series his own while staying true to Jordan. I’ve read that Jordan left very detailed notes on the direction and the grand ending. Soon that ending will be mine to own.
Jordan’s writing contains unbelievably deep characters, told from so many points of view. It’s J.K. Rowling on steroids. Yet each point of view holds its own whether villain or hero. Others may complain of the tangents he spun from the main plot, but I took it all in because he made me care about the characters. 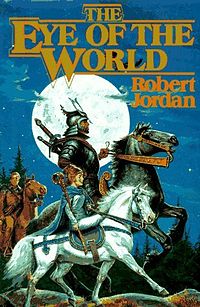 Jordan also loved dropping tantalizing hints. Prophecies, visions, dreams, all gave clues to what might happen three volumes down the line. If only you paid close enough attention you could decipher his intent before it happened. In some ways reading became a treasure hunt. A challenge to accept and beat. Jordan made you work.
At thirteen large volumes, this isn’t a series that lets word count dictate to it. It tells the story that needs to be told, going truly epic in scope. So big you need a who’s who to keep track of all the names. Like magicians, they keep so many plates spinning in the air the readers are dazzled and endlessly entertained.
More than twenty years. Beloved characters will die and other will live. I have my suspicions. No matter what, it will be bittersweet.
Posted by Michelle 4 Laughs at 3:36 PM