Getting the Call: Vicki Weavil

If you've ever wondered what a pitch contest can do for you, this story will explain everything.

I'm so excited to be able to bring another dose of inspiration to the blog. It's been quite awhile since I've had a success story to share with you. This success story strikes a double score because my guest found both an agent and a publisher! She's a lady of class and style and also a Query Kombat mentor. It couldn't have happened to a nicer person. Love ya, Vicki! 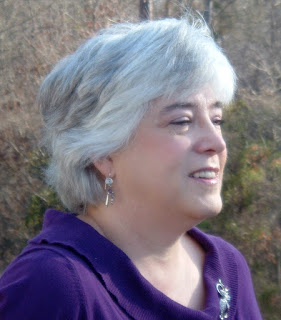 Long ago, in a town so small that you could stand in the middle of Main Street for ten minutes without worrying that you would be run over…

…a young girl developed an obsession.

As soon as she realized that certain marks on paper indicated words, reading consumed her life. She’d lose herself in books to the point where – as her mother put it – bombs could go off under her chair and she’d never hear them. A trip to the library meant coming home with a stack of at least ten books, because her parents had to drive her to another town to visit the library and they could only do that every two weeks. Teachers didn’t believe that she could read that many books in so few days, and often quizzed her on the plots. (She always proved to them that she’d read the books, of course). She read every genre, every style, great books and some not so wonderful. Fairytales, myths, legends, science fiction, fantasy, classics, mysteries, adventure stories – it really didn’t matter. What mattered was reading, and books.

Fast forward many years, and that girl – after dabbling in music, theatre, design, and other artistic pursuits – eventually found her way into a career that was truly perfect – librarianship. But in all that time she hadn’t done the one thing that she’d always vowed to accomplish. She’d never actually written a book.

She’d written lots of stories and poems and bits and pieces of longer works. She’d even outlined and created background information for several novels. But she had never, ever, completed a novel.

After a while, she decided she probably never would.

But then, something happened. Something that I (and yes, as you have undoubtedly guessed, I was that girl) can’t exactly explain. It all started when I was fifty-five – yes, you read that right – and on a whim I wrote a piece of fan fiction about Doctor Who. I just wanted to write out an idea I had from watching the current series. When it was complete, I posted it on a fan fiction site, just for fun. Well, the strange thing was, I found that writing that piece gave me a sense of accomplishment, a satisfaction, a JOY that I hadn’t felt in quite some time. Then I started getting responses from other readers. Comments that said that they’d been deeply moved, even cried, that they loved the piece and wanted to read more.

I wrote my first novel, THE LIGHT FROM OTHER SUNS, in less than three months.  It was an adult science fiction novel that was far too long and messy, but… I finished it. I then spent some time editing – with the help of some great beta readers and a critique partner – before I decided to query.

I read lots of books on publishing and began querying around February 2012. In March 2012 I found Agent Query Connect (AQC  http://agentqueryconnect.com/ ) – a great website for writers – and discovered that I didn’t know what I was doing. At all. So it was back to the drawing board. With a much better query and a growing accumulation of knowledge about the business of publishing, I began querying LIGHT in earnest around May of 2012.  While I waited for the agents to demand that I send them my fantastic first novel (hahhah) I wrote a sequel, THE DARK OF OTHER SKIES.

I sent a lot of queries. Over many months. I got nary a nibble of interest. So, despite the fact that I still thought my scifi books were viable, I decided to “shelve” them for a while and try to write something else. Something rather different.

That something was my Young Adult Fantasy, CROWN OF ICE. Based on “The Snow Queen” by Hans Christian Andersen, my retelling focused on the “villain” of his story – the Snow Queen. Only, in my book, she’s seventeen-year-old Thyra Winther, who’s been transformed into the Snow Queen by a ruthless wizard. Brilliant but emotionally damaged, Thyra has only until her eighteenth birthday to reconstruct the wizard’s shattered enchanted mirror or she’ll spend eternity as a mindless, bodiless wraith.

After finishing CROWN OF ICE in the fall of 2012, with edits running into early winter, I entered a few pitch contests and started querying in January 2013.

Here was my Twitter pitch for CROWN OF ICE:

“As the Snow Queen she’s immortal. As a 17yo human Thyra Winther has less than a year to live.”

Based on this pitch, agent Jennifer Mishler from The Literary Counsel --http://www.literarycounsel.com/  -- requested that I send her my query, synopsis, and the first three chapters of the novel. I was delighted to do so.

I was even happier when the partial request turned into a request for the full manuscript.

However, while Jennifer was reading my manuscript, other agents began requesting partials and fulls of CROWN. And – even more surprising – two excellent independent publishers who specialize in YA also requested my manuscript based on my pitch contest entries.

Now, I did not set out to submit to independent publishers while I was querying agents, but I wasn’t about to turn down requests from great small presses.

For a few months I kept querying – and wondering when I’d hear back on the partials and fulls. When one partial and then one full were rejected, I was downcast. But then I received a Revise and Resubmit request from one of the presses and threw myself into editing, based on the editor’s notes. This editor was so helpful and encouraging, I really felt that I had a shot if I undertook the R&R.

But – before I completed the revision I received an email from the other independent press. Their founder and managing editor wanted to talk to me. As in – on the phone.  I realized, then, that this was THE CALL.

We talked and that press – Month9Books – offered publication on CROWN OF ICE. After dancing around my house for a while, I contacted the other press (the one with the R&R). They set up a Skype call (THE CALL, part two) and during our discussion  they made an offer of publication as well.

Okay. So now I had to inform all the agents who had my partials and fulls. One of these was, of course, Jennifer Mishler at The Literary Counsel.  She responded quickly and set up a time for us to talk. (THE CALL, part three).

When Jennifer and I spoke on the phone, I knew that we were on the same wavelength concerning CROWN OF ICE and my writing career. After communicating with the other agents who were reading full or partial manuscripts of CROWN, I was very happy to be able to respond to Jennifer’s offer of representation with a resounding “Yes”.

So I had an agent! Also – two offers of publication. At this point, of course, Jennifer took over the negotiations with the presses. (She also investigated some other options, but felt that these presses were both excellent fits for a debut YA novel. Both are highly regarded and both provide excellent marketing and promotion, beautiful covers, great editing, and lots of support for their authors).

After Jennifer’s negotiations, we decided to accept the offer from Month9Books.

Because Month9Books is interested in looking at a companion novel to CROWN, that will be my next Work-in-Progress, although I also plan to complete the third book in my science fiction trilogy.  (Jennifer is willing to read my scifi books to see if she can find a home for them as well).

The big news is that CROWN OF ICE will be published by Month9Books in the fall of 2014 – three years after I began my writing journey.

I couldn’t have done it without my family, friends, beta readers, CP’s, and the wonderful writers at AQC, so – thank you, one and all!