Today, I'm excited to share the cover for AMERICA'S NEXT REALITY STAR by Laura Heffernan, which is being published March 7, 2017 by Kensington's Lyrical Shine Press.

SEEKING THE SMART ONE

Twenty-four-year-old Jen Reid had her life in good shape: an okay job, a tiny-cute Seattle apartment, and a great boyfriend almost ready to get serious. In a flash it all came apart. Single, unemployed, and holding an eviction notice, who has time to remember trying out for a reality show? Then the call comes, and Jen sees her chance to start over—by spending her summer on national TV.

Luckily The Fishbowl is all about puzzles and games, the kind of thing Jen would love even if she wasn’t desperate. The cast checks all the boxes: cheerful, quirky Birdie speaks in hashtags; vicious Ariana knows just how to pout for the cameras; and corn-fed “J-dawg” plays the cartoon villain of the house. Then there’s Justin, the green-eyed law student who always seems a breath away from kissing her. Is their attraction real, or a trick to get him closer to the $250,000 grand prize? Romance or showmance, suddenly Jen has a lot more to lose than a summer . . .

Without further adieu, here it is!


AMERICA'S NEXT REALITY STAR is available for preorder now from Amazon, Barnes & Noble, iTunes, Kobo, and Google Play. Click here to add it to your Goodreads shelves. 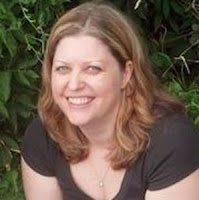 Laura Heffernan is living proof that watching too much TV can pay off: AMERICA'S NEXT REALITY STAR, the first book in the REALITY STAR series, is coming from Kensington’s Lyrical Press in March 2017. When not watching total strangers participate in arranged marriages, drag racing queens, or cooking competitions, Laura enjoys travel, baking, board games, helping with writing contests, and seeking new experiences. She lives in the northeast with her amazing husband and two furry little beasts.

Some of Laura's favorite things include goat cheese, Buffy the Vampire Slayer, Battlestar Galactica, the Oxford comma, and ice cream. Not all together. The best place to find her is usually on Twitter, where she spends far too much time tweeting about writing, Canadian chocolate, and reality TV. Follow her @LH_Writes.

Laura is represented by Michelle Richter at Fuse Literary.