Getting the Call from Query Kombat with Jim O'Donnell

Congratulations to this year's Query Kombat YA Champion Jim O'Donnell on signing with his agent! More than one host had their eye on HOT SAUCE IS BAD FOR WOUND CARE, and we're absolutely thrilled to share this success story. Take it away, Jim!

Stats time! Everyone loves the stats (God, I know I do). It’s so encouraging when you see those meticulously kept stats on how many queries were sent out, how many rejections were received, how many offers came in… if a writer could quantify their journey seeking representation in number of bowl movements from first draft to agency signing, I’d be here for it!

So now it is my turn to list all the fun stats and… I don’t have any.

Sorry. I just didn’t keep any. Well, there are a few. I wrote four full manuscripts and queried three. And I got plenty of rejections. Hundreds. Thousands, if it makes you feel better. But probably more like a hundred.

I do have one more group of numbers that is important. Not just to me, but to a querying writer as well. That number is: Forty-two. No I’m kidding, but wouldn’t that be cool? The real number is six. Over the course of my querying career, I entered six different contests a total of seven times.

I entered Pitch Slam twice with two different manuscripts, first in 2014, then again in 2015, and was selected each time. From my tenure as a Pitch Slam contestant, I received a total of five agent requests and made friends I still rely on. I love this contest so much, I currently help the hosts out as a slush reader.

Contests 2, 3, and 4 were all contests I did not get into. These contests are obviously all wonderful or I wouldn’t have tried to enter. However, not getting in took its toll each time. Getting rejected by agents is one thing, getting rejected by contests is a whole other.

If you are actively querying, the rejections come in so regularly, it gets to a point where you feel lonely when you haven’t gotten one in a week or two. They are a part of the scenery in a writer’s world; like a fern. When’s the last time you read a book where the author focused on, or even mentioned, the ferns? They’re there, they have to be, but dwelling on them is a waste of words. Contest rejections are different. First, there aren’t enough of them to ever be a fern. They are trees, and people write about trees often. Second, they come from fellow writers, and somehow, that makes them hurt so much more. Like I said, these contests are all great, but they are unnamed simply because they hurt the most and I don’t want any of the creators to feel bad about that. The time and energy these people put into the contests for no return other than a couple extra followers and the good feeling that comes from seeing their friends and peers succeed goes above and beyond. Because of this, I really want to say something positive here like, “These rejections gave me the motivation to do better,” or some other inspirational bs like that, but it’d be a lie. The truth is, getting rejected can be crushing, and there doesn’t have to be anything positive that comes from it. Sometimes it just sucks, and that’s all. How you proceed, when you proceed, if you proceed is entirely up to you.

The big one! This contest is so big, I actually had an agent send me a DM on Twitter letting me know I got in. At the time the names were announced, people were refreshing the webpage so much it nearly crashed the system, making it difficult to load. It broke the internet. Pitch Wars is Kim Kardashian's ass. In a good way. This agent, however, was so interested in who was getting in (like many other agents), they kept at it, refreshing until the names loaded, and ended up knowing I got in before I did.

And it’s no wonder Pitch Wars is so popular. Agents are willing to scroll through and read the hundred plus entries each year because they know these manuscripts were the best out of the thousands that entered. Not only were they the best of a huge group, but after being picked, they spent months working with their mentors to make those already good manuscripts great. And the results speak for themselves. Exactly a year after PW15 started out, nearly half of us have agents, and new book deals roll in each month. One of those deals was so big, Donald Trump just asked the writer for a loan. Which given the number of bankruptcies he’s filed, isn’t as impressive as it sounds.

From Pitch Wars, I received eleven agent requests and a group of friends who I’d trade those eleven requests for any day. Mostly because none of the requests led to an offer, but still the community is great.

Query Kombat is by far the most stressful contest I’ve been in. It’s also the one that got me my agent. In all contests, you are competing with other writers. In the submission rounds, you’re competing for a limited number of spots. In the agent rounds, you typically aren’t competing for the highest number of agent requests, but you are competing for each agent’s attention. This is true for all contests. Query Kombat takes it to the next level, says, this level is boring, then bumps it up six levels higher. Not only are you competing in the same anonymous, hardly competitive way as in the other contests, you’re also competing in the one-on-one, nerve-wracking, back and forth, anything-could-change-in-a-second way that I can confidently blame for the decreased volume of hair on my head. I went to a convention while Query Kombat was going on and spent the entire time refreshing the screen on my iPhone. I honestly don’t remember anything from the con other than a friend warning I was missing the entire convention. She was right.

As stressful as it was, it worked. My query was a hundred times better from start to finish, and I walked away with eleven agent/editor requests. Then something weird happened. Requests turned into offers. Offers. With an s. As in more than one. I was (still am) in shock.

In the end, I accepted representation from an agent who requested during Query Kombat, but made her decision to offer based on my work as a whole. This agent’s enthusiasm and willingness to work on all the other projects I'm obsessing over was what won me over.

So, after three years of writing and querying and entering contests, last week, I signed with Victoria Selvaggio of Jennifer DeChiara Literary Agency.

I have a lot of people to thank for reaching this milestone, but right now, the ones most on my mind are the hosts of all the contests I’ve entered. Of course this includes the fabulous hosts of Query Kombat and the other contests I was accepted in, but also the ones I did not make it in. Because after about six hundred words worth of thinking, I’ve come up with something positive to say. In every single contest I’ve entered, I’ve made friends. Friends who have critiqued and edited sentences, paragraphs, pages, entire manuscripts. Friends who have inspired me with their own success and set aside their celebrations to make sure the rest of us don’t feel too bad. Friends who have promised me I’d get to this point even when I knew they were lying. And friends who have said nothing at times because they knew silence was what I needed. Thanks to all of these contests, I found the community that got me here. So thanks, hosts, you all rock! 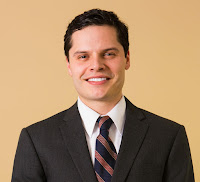 Jim O'Donnell is a father of three (the oldest being three), husband, attorney, and a soon-to-be-retired police lieutenant. If you're wondering why he'll be retired so young, it's because Will Smith is just that good of an actor.

When he's not playing with his kids or trying to convince his work that Will Smith is actually an actor and not a doctor, he writes about teenagers doing bad things. And then his wife threatens to divorce him for spending every second of his free time writing, and after he writes about teenagers doing really bad things. Like murder. You can find Jim on Twitter @JD_ODonnell. He's also on Facebook at Facebook.com/voteODonnell. Yeah, that's right, he once ran for Congress. No one ever said he was the smartest guy in the world.
Posted by Michelle 4 Laughs at 7:18 PM