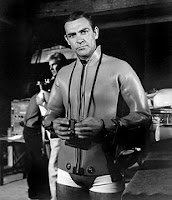 I’m fortunate that my husband and I share many of our tastes. We lean the same way politically and have similar values. Irish football Saturday is a given. There’s no fighting over the remote as we both like science fiction and fantasy along with a dose of action movies. Romantic comedy has it place and so does reality TV. So while he may pick steak over chicken and forgo my chocolate for his health shakes, we agree on James Bond. 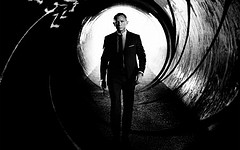 I don’t know where it started for him, but I was too young to appreciate the first Bond movies. That’s where cable came in. Once the number of TV stations exploded, there were Bond marathons everywhere taking us back to those slightly campy early ventures. We liked the gadgets, the cars, the overdone villains, the dry innuendos. We became fans for life.

So it went through the ‘80’s with Roger Moore and Timothy Dalton, though we agreed Sean Connery was our favorite. Into the ‘90’s with Pierce Brosnan playing a slightly more haunted Bond. Then came that relatively long break where the series lay dead. Suddenly, a newcomer burst onto the scene. We were skeptical. A blond Bond? Hmmm. 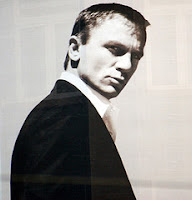 Casino Royale was a revelation. It was modern. It was hard. Who was this dark troubled James Bond? This character mixed regret with dedication to duty. Queen and Country didn’t necessary mean a lack of feeling. Not only us, but the world had a new favorite Bond.

That included our children. What’s the point of having kids if not to brainwash your tastes onto them. And as they grew to teens, who’d rather sit in their rooms than do anything with their parents, we still have Bond in common. In a parent coup, the whole family went to Skyfall together. 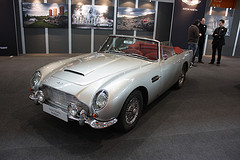 To avoid spoilers I’ll just say the Skyfall had all the Bond ingredients. The huge edge-of-your-seat-chase scenes. The Austin Martin. The fun reminders of previous movies. Iconic characters and a really creepy villain. (This villain was the best of the three Daniel Craig movies.) Exotic locations that have been ‘shaken, not stirred’. Destruction and mayhem galore. But unlike previous decades, this Bond has back story. More light is shed upon his character with each installment.

And speaking of installments: how does the Bond success provide lessons to writers that are looking to create their own series? Stay tuned. That will be the subject of my next post.
Posted by Michelle 4 Laughs at 3:21 PM