I'm very excited to be a part of the cover reveal contest for Terri Bruce and Thereafter! It's seems like it has been forever since I read and enjoyed Terri's terrific first book, Hereafter. I can't wait to get my hands on Thereafter. And don't you think the cover model is fantastic? It's exactly how I picture Irene.

Author Terri Bruce is celebrating the upcoming release of Thereafter, the second book in the Afterlife Series, with a scavenger hunt/giveaway! One Grand Prize winner will receive a set of 20” x 30” unframed cover art posters (1 each for Hereafter and Thereafter), signed by the author, and an eARC of Thereafter! Five first place winners will receive eARCs of Thereafter. Contest is open internationally. As a special bonus, everyone who enters the contest will receive, via email, a special sneak-peak excerpt of Thereafter, featuring Terri’s favorite scene! 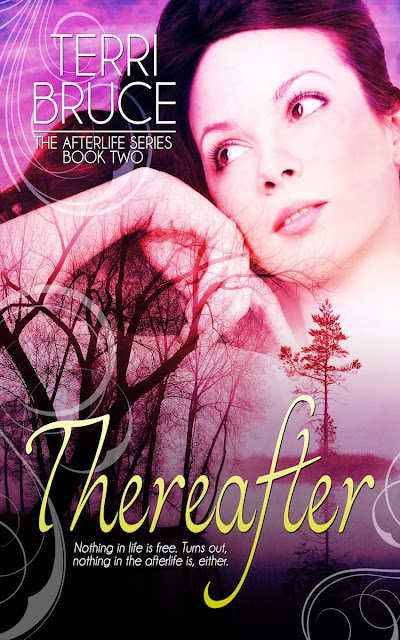 Nothing life is free. Turns out, nothing in the afterlife is, either.

When recently-deceased Irene Dunphy decided to “follow the light,” she thought she’d end up in Heaven or Hell and her journey would be over.

1. Visit all fourteen stops participating in the Thereafter Cover Reveal Blog Tour
2. At each stop, there is an excerpt from Thereafter with a word highlighted in red
3. Collect all fourteen of these highlighted words and arrange them into a fourteen-word sentence that reveals a major plot point of Thereafter
4. Email the sentence and your name to Contest@terribruce.net
5. Then enter via Rafflecopter to confirm that you emailed in your contest entry
6. Additional bonus entries for joining Terri’s mailing list, tweeting about the giveaway, and shelving Thereafter on Goodreads will become available once you have completed the main entry

And here is this blog's contest excerpt with the highlighted word:


“You will attract the Hungry Ghosts,” Andras said wearily, as if it was becoming an intolerable burden to continually explain the most basic of concepts to her.
“I know,” she said, struggling not to bite his head off.
“They may be harmless, pitiable creatures, but it is folly to draw their attention.”

Find the other thirteen Contest Participants here:
Powered by Linky Tools
Click here to enter your link and view this Linky Tools list...

Terri Bruce has been making up adventure stories for as long as she can remember and won her first writing award when she was twelve. Like Anne Shirley, she prefers to make people cry rather than laugh, but is happy if she can do either. She produces fantasy and adventure stories from a haunted house in New England where she lives with her husband and three cats. Her second novel, Thereafter (Afterlife #2), will be released June 1, 2013.