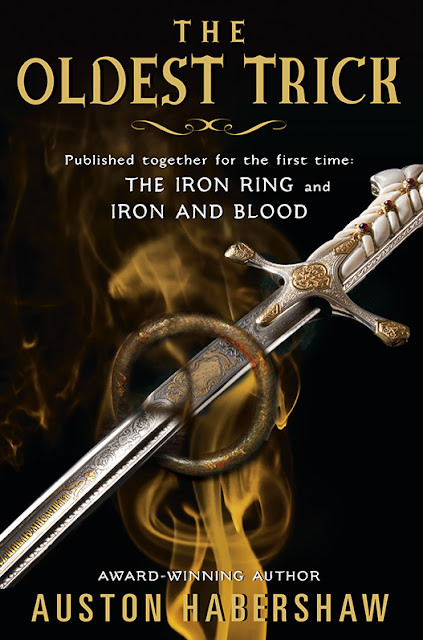 Compiled for the first time, THE OLDEST TRICK comprises The Iron Ring and Iron and Blood in the Saga of the Redeemed. Tyvian Reldamar gets betrayed by his longtime partner and left for dead in a freezing river. To add insult to injury, his mysterious rescuer took it upon himself to affix Tyvian with an iron ring that prevents the wearer from any evildoing. Revenge just got complicated. On his quest to get even, Tyvian navigates dark conspiracies, dodges midnight assassins, and uncovers the plans of the ruthless wizard Banric Sahand. Tyvian will need to use every dirty trick in the book to avoid a painful and ignominious end, even as he learns to work with—and rely on—his motley crew of accomplices, including an adolescent pickpocket, an obese secret-monger, and a fearsome gnoll.

The Long Arc: The Challenge of Writing a Series

When I sat down to start writing the Saga of the Redeemed, I knew where it was all going. Maybe not on a micro level (like, the individual scenes for all the books were pretty damn far from being plotted out), but in general, I knew where I wanted Tyvian Reldamar to start and I knew where I wanted him to end up (don’t worry – I won’t spoil anything). I also knew it wouldn’t be contained in a single book. Probably not even three books.

How did I know this? Well, I don’t really know. I think it was because of two reasons, and I think these two reasons are pretty important factors to consider anytime you’re planning to write a book or series of books:

I don’t mean physically, either. Maybe “deep” is a better word – basically, how much story is there to explore in the setting you’ve created? If you don’t visit every single nation on your world map, will the audience miss it? How much of the world matters in the story, anyway? For Tolkien, of course, he had a vast mythology and epic forces of good and evil clashing, and so he needed a bunch of books to give the story the space he felt it deserved. Likewise, Jim Butcher’s Dresden Files just keep going and going and going because it always feels like there’s more to discover. On the other hand, there’s The Goblin Emperor by Katherine Addison – an excellent, excellent book, mind you – which is contained in a single volume. Why? Well, Maia’s story fits there, neatly and cleanly. There simply isn’t a need for more.

#2: How Much Does the Character Change?

This is crucial. For the most part, stories are about how the protagonist changes as a result of their experiences. Now, there are exceptions (*cough*JamesBond*cough*), but mostly that’s true of almost every story, regardless of genre. We are reading to experience some kind of change, subtle though it may be. The further a journey your character has, the more story you’re going to need to write and the more books it will take to tell that story. Tyvian, in my novels, begins as a shallow, narcissistic, self-involved criminal. The story is about his slow change from that to…something else. Now, I don’t think people change on a dime, nor do I think stories of redemption accomplished in a weekend are convincing (sure, sure – Uncle Paul found Jesus this weekend and is going to stop drinking – what’s this, the seventh time?), and so I feel that Tyvian’s shift must be a gradual one. It is going to take several books to accomplish.

The series, however, presents some significant challenges for the new author, such as myself. At a basic level, you need to get a publisher to keep buying your books (or, I suppose, you can self-publish, but then you need to keep paying for cover art and editing and so on and so forth, so the basic problem is the same, even if the specifics are wholly different). Are my books selling? Well, sure they are! They are pretty steadily floating between 1000th and 2000th place on Amazon for Fantasy novels! So…yeah, people are buying them, but nobody is putting a down-payment on a summer home. I’ve got a contract through Book 3 (which, technically, is Book 2), but I need two more books to finish the story to a point where I feel satisfied walking away.

Can I get a contract for those other two? Can I score an agent to represent me? I don’t know. It’s worrying, frankly, and it’s something you need to consider about your series. They might not want to publish books 5 and 6, no matter how dear they are to you.

Of course the other, perhaps more daunting problem (even if it is more under your control) is actually writing a satisfying series of novels. You know how you read the first book in a series and you’re like “whoah! That was the most awesome thing ever!” and then you read the next one and you’re like “Oh…uhhh…it was okay, I guess,” and then by the time you’re at book 3 you’re totally fed up and the story is lame and you don’t care about the characters anymore?

Yeah, nobody does that on purpose.

All writers try to make their second and third and fourth books every bit as awesome as the first one. The problems, however, are two-fold as I see it. A sequel must:
Clearly, these two things are potentially at odds. Doing it well requires you to have a keen grasp of what matters in your story and what does not. This is harder than you think, too. First off, you’ll probably guess wrong – the things you love about your series might not be the same things your audience loves (hence: WRITE REVIEWS, PEOPLE!). Secondly, even assuming you guess correctly, you still need to change things to keep it fresh enough. Remember the Star Wars prequels? Remember how boring they were? Well, each Episode did not sufficiently advance the story we cared about enough to make it work and, furthermore, the world as presented was not deep enough to support all three films. Could you have done them so they worked? Sure! But we would have had to focus on Anakin and his gradual change into a monster rather than on four-armed lightsaber duels and CGI effects.

The pitfall of keeping it fresh, though, is losing the thing that made it fun to begin with. To use George RR Martin’s series, A Sword of Ice and Fire, I’ve basically checked out of the books at this point because the thing that kept me invested – the struggle between the Lannisters and the Starks – is basically over and done with. Everybody I loved is either dead now or changed so much that I’m no longer invested. The books go on and the world is certainly deep enough, but the characters just aren’t there anymore for me. As much as it remains a towering achievement of fantasy literature, I’m out.

So, to circle back, I find myself writing Book 4 of The Saga of the Redeemed at the moment and I need to keep reminding myself of why I love this series in the first place (answer: the characters) and what has to change in the story to keep it fresh (maddeningly enough: the characters). It’s a balance, and a difficult one. I mean, honestly, how many more swordfights can Tyvian get in before it becomes boring? 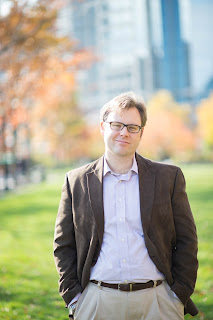 On the day Auston Habershaw was born, Skylab fell from the heavens. This foretold two possible fates: supervillain or scifi/fantasy author. Fortunately he chose the latter, and spends his time imagining the could-be and the never-was rather than disintegrating the moon with his volcano laser.   Auston is a winner of the Writers of the Future Contest (Volume 31) and has had work in Analog and Stupefying Stories. His debut epic fantasy series, The Saga of the Redeemed, is available from Harper Voyager books. He lives and works in Boston, MA. He has a blog athttp://aahabershaw.com/.