Here to relieve some of that endless worrying is a series called Query Questions. I'll ask the questions which prey on every writer's mind, and hopefully take some of the pain out of querying. These are questions that I've seen tossed around on twitter and writing sites like Agent Query Connect. They are the type of questions that you need answers for the real expert--agents!

I've been trying for some time to get an agent from this fabulous agency. Many of my favorite authors are represented there. I'm so happy to have a chat with Sam Morgan of JABberwocky Literary Agency.

-Is there a better or worse time of year to query?

Not really. It always helps to make sure the agent is actually accepting queries at the time though, so a little research beforehand is good.
-Does one typo or misplaced comma shoot down the entire query?

True story: my first form rejection had a typo in it. I must’ve sent it to hundreds of authors before someone pointed it out. So I’m quite aware that typos happen. But it’s still something that shouldn’t happen, so you’re better off combing through your query one last time, checking each word (start backwards so you’re seeing it from a different light) before sending it off. After all, if you don’t have any typos you don’t have to worry about that being the thing that gets you rejected.
-Do you look at sample pages without fail or only if the query is strong?

Oh yes. Some writers are natural marketers and can make a pile of trash seem like the next great American novel. But then they actually write like trash. Meanwhile, your next great novelist might not be able to sell water in a desert. I don’t want to miss out because the writer isn’t able to sell a book, after all, that’s my job.
-Do you have an assistant or intern go through your queries first or do you check all of them?

Assistant? What’s that?
-Do you keep a maybe pile of queries and go back to them for a second look?

Absolutely. I’ve been doing this long enough to know whether I need to give something a little more attention or not. The problem is that ‘maybe’ pile keeps growing!
-If the manuscript has a prologue, do you want it included with the sample pages?

I ask for the first five pages, so if the book begins with a prologue then yes, that should be in the first five pages. That’s where the editor will start. More importantly, that’s where the reader will start. If you want to introduce me to the “good stuff” that happens after the prologue, why even have a prologue?
-How important are comp titles? Is it something you want to see in a query?

They’re definitely helpful. But be careful. I honestly had a query once that compared the book to “Game of Thrones, Harry Potter, The Hunger Games, Twilight, and the Lord of the Rings.” Literally the five biggest genre titles of the past twenty years. Don’t do that. Find smaller, more specific comparisons. If you do emulate something from a bigger property, get specific about the aspect of you’re comparing your work to, like it has the multi-generation spanning history like Game of Thrones but with the magic system of Harry Potter, or something like that.
-Some agencies mention querying only one agent at a time and some say query only one agent period. How often do you pass a query along to a fellow agent who might be more interested?

Not that often but only because our tastes don’t really overlap. But when someone does send me something that I think another agent might like I do not hesitate to show it to them.
-Do you prefer a little personalized chit-chat in a query letter, or would you rather hear about the manuscript?

Absolutely! It’s my theory that an agent/author relationship is just that - a relationship. We have to be compatible to work together. But like a first date, don’t overdo it. Be cool, be confident, but don’t be cocky. Remember we’re mostly here about your book, but a little personality doesn’t hurt.
-Most agents have said they don’t care whether the word count/genre sentence comes first or last. But is it a red flag if one component is not included?

Definitely a red flag. Genre and word count are two vital pieces of information an agent needs to know.
-Writers hear a lot about limiting the number of named characters in a query. Do you feel keeping named characters to a certain number makes for a clearer query?

This is actually something I’ve never thought about, but since you’ve asked it, it does make sense. You want to make your pitch as clear as possible and the more named characters you have the more muddled it does become. There’s a great XKCD cartoon about how the more made up words for fantasy items you have in your story, the less interesting it is. If only there were a way for me to send you the link to that cartoon! Oh wait, this is the internet. Here it is!
-Should writers sweat the title of their book (and character names) or is that something that is often changed by publishers?

For starters, if you do get a publishing contract, the title of the book should be agreed to by mutual consent by the publisher and the author (that’s your free tip of the day). A good title helps, but it’s not necessary. One of my clients grabbed my attention because he had the greatest title of all time, in fact, the title came before the story, and now he’s in the middle of writing his third book for a Big Five publisher. But if you don’t have a SUPER DUPER AMAZING title, don’t sweat it.
-How many queries do you receive in a week? How many requests might you make out of those?

How many stars shine but we don’t see? I’d probably say about 100 a week, but it varies. As does the requests, but the average is probably 5 partial requests a week. And of those partials, probably 1 becomes a full request.
-Many agents say they don't care if writers are active online. Could a twitter account or blog presence by a writer tip the scales in getting a request or offer? And do you require writers you sign to start one?

The only way it would tip the scales for me is if you are “known” for your blog or twitter. If it’s just your own personal thing or you’ve gathered up a couple thousand followers or page views, probably won’t make a difference. I don’t require you to do anything you don’t want to do. It definitely helps, but you do you.
-Some writers have asked about including links to their blogs or manuscript-related artwork. I’m sure it’s not appropriate to add those links in a query, but are links in an email signature offensive?

Offensive like clutch my pearls offensive? Absolutely not. I’ll check them out on occasion too, just to get a sense of who you are. But it’s one of those things, if you include the link and it leads to something you might not want me to see, why would you send me the link?
-If a writer makes changes to their manuscript due to feedback should they resend the query or only if material was requested?

I’d say only if the material was requested. Another true story: I had one author query me three time with the same manuscript. Same query each time, but the word count grew and grew each time. Always make sure your draft is finished when you query, please.
-What bio should an author with no publishing credits include?

Treat it like a boxing announcer. “IN THIS CORNER - THE BARD WITH A YAAAAARD!” Kidding, of course. Just tell me something about yourself. I want to know who you are!
-What does ‘just not right mean for me’ mean to you?

I distinctly remember the first time I read each of my client’s manuscripts. There was this feeling in my gut, something changed inside of me, imprinted on my memory. It’s a feeling you have when you recognize that you’re in the middle of something special. And when I read something that does everything correctly, I see all the parts working together smoothly, creating a good solid story, hitting all the correct plot points with a wonderful voice, when I know I could sell it but my heart wouldn’t be behind it, when I know this book deserves love but I’m not in love with it, when it’s a good book... but it just doesn’t give me that same feeling in my gut, then it’s just not right for me.
-What themes are you sick of seeing?

I’ve been getting a lot of fantasy police procedurals that talk more about the mystery than the detective. It’s never about the mystery. It’s always about the character.
Oh, there’s also been a glut of books about virtual reality for some reason?
-Do you consider yourself a hands-on, editorial type of agent?

That’s why I do my job! I love getting my hands dirty.
-What’s the strangest/funniest thing you’ve seen in a query?

I always appreciate the ones addressed to different people.
-What three things are at the top of your submission wish list?

1) Skins meets Harry Potter: take the grounded stories of Skins, but add it into a world with magic like Harry Potter. No characters learning about magic. No ‘chosen one’ prophecies or anything like that. Real people, real problems, but with magic. If you don’t want to write about kids, I understand, so do FRIDAY NIGHT LIGHTS instead of Skins.
2) I love high concept TV like Pushing Daisies. More of that, but in book form, please.
3) Ready Player One but with newspaper comics instead of 80’s video games.
4) I’ll do four because I’m insatiable: being stuck in a space ship on a multi-lightyear journey would devolve into some high school drama antics. Show me that.
-What are some of your favorite movies or books to give us an idea of your tastes?

I actually give a big ole list of just what you’re looking for on my agency’s page about me! You can check that out here and also find out a bit more specifically about what I’m looking for in new clients. 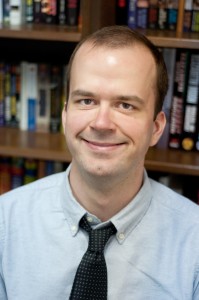 Sam is the Right Hand of Darkness at JABberwocky. He is a native of Shelby, North Carolina and graduated from the University of North Carolina at Chapel Hill with a B.A. in Communications – Media Studies and Production. Before joining Jabberwocky in late 2012, Sam worked throughout New York City as a television critic, pizza guy, and several other glamorous positions. He’s an active nerd across all media from British television (Doctor Who and Black Mirror), to videogames (Injustice and Nintendo), to SF and fantasy novels (Prattchett, Adams, Gaiman), to college basketball (Go Heels, Go America). Sam is also active in the New York comedy scene at the Upright Citizens Brigade theater and making his own little rinky-dink videos in his spare time. He is ridiculously handsome, gut-busting witty, and prone to hyperbole.
Posted by Michelle 4 Laughs at 7:30 AM