Getting the Call with Valerie Bodden

There's no better way to start the week then a success story that lifts your heart. Even better when the call story comes from one of our contests! A big thanks to everyone who makes those contests a success. Now here's Valerie: 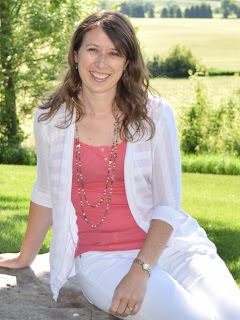 You know how there are always things you want to do someday? For me, that was writing a novel. I got my start in publishing in 2006 when I landed my dream job as an editor for a school and library publisher. The next year, my first child was born, and I transitioned to a freelance role as an author for the school and library market. For the past decade or so, my day job (ha! try the job I squeeze in during naptime, bedtime, sports practice time) has been as an author of children’s nonfiction.

And though I love nonfiction, I knew something was missing. I’d started out writing stories in fourth grade (for the record, my first book was called “Enemies Are Friends,” and I still have it—thanks, mom, for keeping everything!), and I wanted to get back to that. But between raising four children and writing 200+ books, I was a little short on time.

I figured I’d get back to fiction someday—someday when I had more time (still waiting for that one), someday when my youngest was in school full time (she isn’t yet), someday when the stars aligned and the words came pouring out of me with no effort (that’s how it’s supposed to happen, isn’t it?). Fortunately, someday came out of nowhere and smacked me on the head.

I don’t even know how or why it happened, really, but one day in 2013, when my youngest was only a year old, the stories in my head and in my heart couldn’t wait a moment longer. So I started writing them down. I didn’t really think much about it at first, just opened a file and started throwing words onto the page. Though my first story ultimately stalled out and so did the next couple, they were a start, and I couldn’t go back to waiting for someday.

So when in 2014, I heard of this little thing called NaNoWriMo, I thought, I can do that. 50,000 words in a month is totally doable. No sweat. I may have been slightly delusional. Turns out it was a lot of sweat, but I did it. And when the month ended, I kept working on that story and revising it until in early 2016, I felt ready to query. I sent out a small batch of queries and then promptly got swallowed by nonfiction deadlines. By the time I emerged in the summer of 2016, I realized the novel needed another revision, so I set to it.

In the fall, I was ready to query again. I entered a few contests with agent rounds but didn’t get chosen. I debated entering Nightmare on Query Street because I felt a little contested-out, but I decided I didn’t have anything to lose by going for it. If I wasn’t chosen, I could still cold query, and if I was, I’d have the best of both worlds: a chance to be mentored by an experienced author and a chance to get in front of agents.

So I sent in my entry and didn’t forget about it, exactly, but the mentees were announced on my son’s birthday, so by the time I got done wishing him happy birthday and shipping the kids off to school, the results had already been up for a couple of hours. After going through the first two lists, I pretty much resigned myself to the fact that I hadn’t made it into the contest. Then I flipped to the list for Mike’s Monsters. I had to read it three times—but every time, my manuscript, DROWNING IN AIR, appeared there. There was no one home to celebrate with. Except the dog. Fortunately, she’s a party animal.

I was paired with C.B. Catalano as my mentor. Guys, she was awesome. She really pushed me to laser-focus the stakes in my query and to end my 250 in a way that would make agents cry for more. Finally, we were both happy with my entry, and I submitted it, then settled in to wait for the agent round. This time, I didn’t forget. There may have been a lot of refreshing of my browser involved. Ultimately, I ended up with one NoQS request. But I also knew I had ended up with a much stronger query and a team of cheerleaders behind me. With Cassandra’s encouragement, I began to send out more cold queries. Then things got real.

My NoQS-perfected query led to several full requests. One that came in very quickly was from Jane Dystel of Dystel, Goderich, and Bourret. I sent the full manuscript off and settled in for the long wait. But within a few days, I received another email—Jane’s partner had loved it, and Jane was reading it. When I received an email from Jane two days later, I thought, That can’t be a good sign. She must have given up on it. But it turns out she had flown through the manuscript and wanted to call to discuss representation.

We spoke on the phone the next day, and she was so enthusiastic about representing the book and my career. The next few days were a flurry of emailing agents who still had queries and fielding more full requests and agent responses. A week later, I called Jane to accept her offer. It still hardly seems real, and I can’t wait for the next stages.

So, I guess the moral of the story is, if you’re passionate about writing (or any other pursuit), don’t wait until someday. Make today your someday.

Oh, and moral number two: the writing community is the best place in the world to be. Do you know how many people out there are pulling for you? Writers like NoQS hosts Michelle Hauck, Laura Heffernan, and Michael Anthony, along with C.B. and all the mentors, have their own lives and their own deadlines, but they freely give their time because they want to see other writers succeed—that means you. So my huge thanks to them, and my encouragement to you: if you’re considering entering a contest like this, do it!

Valerie Bodden is a YA writer and the author of more than 200 children’s nonfiction books. Her books have received critical acclaim from Booklist, Children’s Literature, Foreword Magazine, Horn Book Guide, VOYA, and School Library Journal. Valerie lives in Wisconsin with her husband, four children, one dog, two cats, a growing collection of fish, and miscellaneous bugs that her children have “rescued” from the outdoors. She spends most of her time writing or wrangling children and animals. Valerie is represented by Jane Dystel of Dystel, Goderich, and Bourret.