Getting the Call: Heidi Vlach

I'm surfacing just long enough from a week of heavy editing on Kindar's Cure to post a dose of inspiration. I met Heidi on Twitter and invited her to share her story. I know many writers whose stories don't fit into a neat and tidy cubbyhole of what is considered marketable--I'm one of them. I really love how Heidi didn't let that news stop her. Thanks for telling us about your journey, Heidi. And your cover art is beautiful.

Thanks for having me, Michelle!

I didn't receive a call -- it's more like I unearthed one. I'm just grateful this happened during the ebook revolution, where I have the tools to excavate.

When I'm taking in a book, TV show or video game, I usually find the non-human characters most interesting. The human experience has lots to explore, but that bounty grows even larger when you consider how another sentient being might see things. I want to know what the anthropomorphic cat is thinking, or how the intelligent squid feels about life and love. I don't think you need a human-looking face to be considered a person. If everyone thought that way, humans might even have more empathy for fellow humans.

When I was 18, I decided to develop a novel full of the things I wanted to see. It took six years of work, and my awful first manuscript getting trunked, but I developed the world of Aligare. This place is completely human-free. The peoplekinds are feathered dragons, and insect-like folk, and bright-eyed weasels -- all of whom live peacefully and collaborate to solve their problems. No senseless wars or xenophobia here. This would be a cool place to mentally explore, the really unique story I had never been able to find in the library. 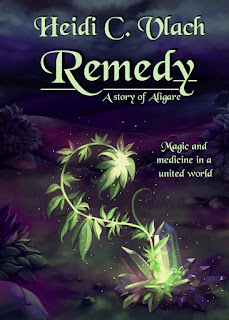 My second full-length manuscript was Remedy, a medical drama. It's the story of deaf miner Peregrine and his hearing assistant Tillian. Peregrine is a proud old dragon who secretly fears that he made the wrong life choices; Tillian is a friendly little weasel who swore to stay by Peregrine's side as long as her own lifespan allows. These two pitch in with the relief efforts for gripthia, a dreaded sickness which can only be survived with labour-intensive nursing care. It's a big step for Peregrine to get by without Tillian, but he's determined to give her some independence. The core of this story is the struggle to do what's right.

I was proud of this novel. Still am. Years of finessing had gone into the worldbuilding, and the storyline was unlike anything I had ever seen in mass-market fantasy. But I sent out about 50 query letters and I got all form rejections. Not one nibble. I didn't want to become one of those writers who wastes their whole life waiting on query letters, stuck in a depressing, directionless purgatory. So when I saw a charity fundraiser auction for a meeting with a New York editor, I jumped on it. Quite a road trip, from Ontario to New York, but I was glad for it!  Face to face, I explained Remedy's concept to one knowledgeable editor-- and I was flatly told that this thing wouldn't sell. It wasn't a children's "animal book" and it wasn't a fantasy war epic, so it was clearly unmarketable.

I've never believed it possible that "no one" will like a new concept. There are billions of people in this world and they all have different tastes. No matter how odd the subject, there are always a few people willing to try. More importantly, if no one is ever willing to try a new concept, how does the modern fantasy genre exist in the first place? Did <i>Lord of the Rings</i> leap fully formed from Zeus's head and land on bookstore shelves?

On the bus home from New York, I realized I had found a calling. A fragment of potential that needed to be dug up, cleaned and put on display. And instead of hoping some agent would unearth my calling for me, I decided to self-publish. I'd be able to explore my Stories of Aligare on their own merit, without worrying about making them "normal". Over the next few months, I consulted a freelance editor who liked atypical stories. I agonized over how Remedy's cover should look. Finally, on February 2011, I clicked the Publish button for my first completed book.

I wish I could say that Remedy has sold ten zillion copies so far. Heh, it sure hasn't! But building a niche can be a slow process, especially when the story doesn't fit cleanly into popular genre categories. I'm playing a long game, here. A story doesn't have to be an instant bestseller to be an enjoyable story: in our modern world of high-budget blockbusters, it's easy to forget that.

After Remedy came Ravel, a romantic novelette set in Aligare. This spring, I'll be publishing Render, a mystery-ish novel of Aligare. Each story stands alone and has a slightly different flavour. There'll be more stories -- and I just hope to find readers who like seeing through other creatures' eyes like I do.

Find out more about Heidi and the world of Aligare at www.heidicvlach.com. Heidi's books are available through Amazon, Smashwords, Barnes and Noble, and other online retailers.