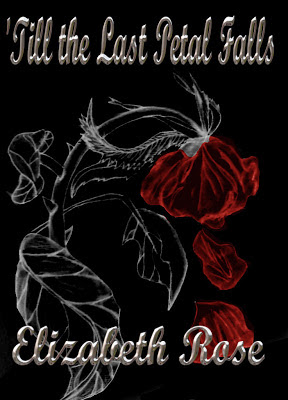 Jolee Bellissa is a 21 year old English major graduate living with her soon-to-be penniless inventor father, Moe, in Highlands Ranch, Colorado. All that's waiting for her in this 'bubble' of a town is a relentless suitor, Gage Aristade (son of a rich accounting CEO and notable playboy), and a part-time job at the local Tattered Cover. When she sees a job listing for a literature and poetry tutor for a shut-in adult student in Aspen, room and board paid with a $1000 a month stipend, she figures she has nothing left to really lose.


Adam Emile is a 33 year old eccentric artist, whose paintings' beauty is only matched by their disturbing choice of focus. Scarred by a horrific childhood and holed up in the mountains to keep from embarrassing his wealthy and famous father, he is beginning to lose all sense of reality. As a last resort, his personal nurse Chip has put out an ad on Craigslist, under the guise of tutoring, for a new friend for his patient. Will the beautiful young woman who answers the ad change Adam and break the curse of his mental depravity? Or will the secrets he harbors drag them both into madness?

Her father had once told her that she should never go to bed with something heavy on her mind, and to never let things go unsaid longer than was absolutely necessary. There was plenty of night left. It wasn’t like she was going to wake Chip up at midnight and she doubted he went to sleep this early. It would only take a moment. She would air things out and then invite him to go more in depth with her in the morning. Adam wouldn’t ever suspect that she was there.
She didn’t know why that made her feel calm. Why should she fear Adam finding her? It wasn’t like she would be snooping around. She was going to talk to Chip and there were no rules against that. With resolve she set off for the west wing by way of the long hallway at the top of the grand staircase. For some reason she expected a large change when she crossed the threshold to the opposite side of the house, some kind of mysterious mist or gloom. To her mild disappointment the men’s hallway was just the same as the women’s—broad wood paneling that was largely empty of decoration with the exception of a few potted ferns and generic display cases scattered along the edge of the walkway. There were four doors at the end of the hallway. One was at the very end, two were close together on the left and the last stood alone on the right. Since Chip and Adam were the only ones who lived at this end of the house, Jolee guessed that the two doors that were close together led to the men’s private bathrooms. Adam, as head of the household, would have taken the master bedroom, which would logically be behind the door straight ahead at the end of the hall. That left only the single door to the right. She went up to it and rapped lightly.
"Chip?” she called softly. There was no answer.
It couldn’t hurt to try the handle. She found that it was unlocked, but paused before opening it. What if he wasn’t in? Would it spook him if she was waiting for him here? It would be better for her to startle him than Adam. What if she was found loitering around in their hall? Though he had become gentler to her, there was no promise that Adam wasn’t still just as votile and territorial as ever. Perhaps Chip was inside changing or laying down and just hadn’t heard her? With a deep breath she pushed the door open and peeked inside. The lights were out, making it hard to see, but she could tell that the room was much bigger than her own and she couldn’t see a bed. She groped along the wall searching for the light switch and turned it on.
Blinking furiously at the onset of the sudden light, Jolee was inclined to attribute what she saw to the temporary blurriness of her vision. She was surrounded by a flurry of red, dazzling and vibrant in every shade of the spectrum known to the human eye. Paintings covered the room in almost every nook and cranny. They hung from the walls, they leaned against one another; they were splayed across the floor so that there was barely room enough to move around. The only untouched part of the room was a little rough circle in the center just big enough for maybe two people standing close together. Rose petals danced across the canvases like a storm of red flakes. She was drowning in them and drawn even further into them. The petals were painted in various stages of wilting and decay, like a hospital for flowers. Those few that were in bloom were depicted as being torn apart with jagged pieces and demolished stems lying in thick puddles of oil that were painted with such excruciating detail that she feared to touch the sheets for fear of soiling her fingers. She half expected the petals to fall if she so much as stirred them but she couldn’t help getting closer to them. She moved towards them slowly, quietly, as if she could have awakened them. She squatted down to get a closer look and nearly hurled....

Bio:
Elizabeth Rose is a twenty-something college student in Denver, Colorado, double majoring in Religious Studies and English. Though "'Till the Last Petal Falls" is her first full-length novel, she has been published in poetry since her junior year of high school. To date, she had appeared under her real name in over twelve journals, both in print and online. 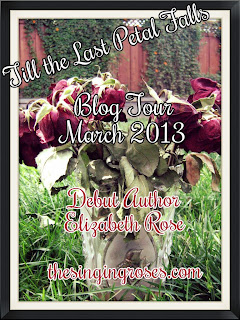 Check out her blog for the full blog tour.
Posted by Michelle 4 Laughs at 4:19 PM