The advice is to write what you know. But how do you do that when you write fantasy? My life experience with magic and sword play is limited—okay, nonexistent. However, there are other angles besides the plot to put this advice into practice, such as the characters. So when I began to imagine the new characters for my epic fantasy, Kindar’s Cure, I searched my mind for any knowledge I could apply. What did I know a lot about that could make my story stronger? The answer was history. 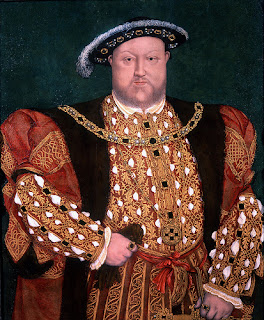 Stealing: I’ve always had a love of history. I can’t resist picking up new biographies at the library, and the more ancient the subject the better. I’m not talking reads about Snookie or Barack Obama. I prefer Churchill or Hadrian or Catherine the Great. My two areas of special interest have always been Revolutionary America and Tudor England. I’ve read everything I came across on those subjects.

The revolutionary era didn’t really fit with my story based in a medieval world, but the Tudors were a goldmine. They were a royal family with three children, and Kindar was the middle daughter of a royal family. I needed conflict and dysfunction, and what’s more messed up than Henry VIII, his six wives and three kids, Mary, Elizabeth, and Edward? My Kindar is a strong determined woman, who knows her own mind and wants a throne. One of the strongest queens in history, Elizabeth the First, Henry’s second daughter, managed to survive her father’s deadly displeasure to take the throne. I began to model my royal family on those famous true-life royals.

Transforming:  I couldn’t pick up the Tudors and set them down as is into my fantasy world. That would be a little too obvious. I took the facts about them and molded them, twisting and shaping until I had a shadow version of history.

The single biggest change was to make my world, Anost, a matriarchal kingdom. Henry became an empress instead of a king. I also turned, his son, Prince Edward, into the bratty youngest daughter, making my entire royal family female. Obviously, I couldn’t have one wife, let alone six. I left the wives out and created one banished husband. Making the relationships inside my royal family every bit as unhappy as the true life version, my story focused on telling the tale from the prospective of a Tudor heir. 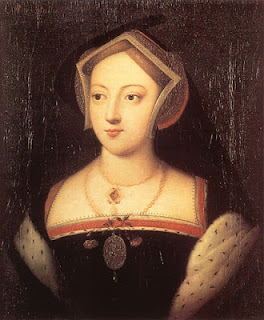 After all, Henry VIII declared both his daughters bastards and kept them under house arrest, with the headman’s axe continually hanging over their heads. What would life have been like for the disfavored Elizabeth and Mary? Henri divorced or murdered their mothers. Henry VII was also notorious for his rages and unpredictable temper, led on by paranoid fears. What better conflict than to give these same character traits, including the raging hysterics, to my Empress Eugenie, making sure her royal daughters suffered the same uncertainty and threat as their historically versions.

Desperate for a male heir, the War of the Roses just before his father’s reign gave Henry a horror of an unstable succession. That one great terror drove all his decisions, including throwing off wife after wife along with his entire country’s Catholic religion. And as Henry the VIII had a deep abiding reason for his wife shuffle, my empress needed something to drive her.

What better than a prophecy of doom and gloom? A prophecy that predicted the advent of three royal daughters would proceed a time of dark catastrophe and war for Anost. A dark time that Empress Eugenie was desperate to keep off by whatever means necessary.

Outside the real sixteenth century Tudor family, the conflicts was every bit as bad. Tensions couldn’t help but spill over to their court. Whispers of treason were everywhere. The headsman axe had frequent business among the noblemen and women, creating an aura of suspicion and terror where people were afraid to look crossways at each other lest trouble land on them. The Tudor children couldn’t trust their father, their siblings or the people surrounding them. Mistrust isolated them. I built the same atmosphere around Kindar, forcing her to start the story as a hard, cold character, clinging to her rank and herself, unable to speak her thoughts even to her allies. 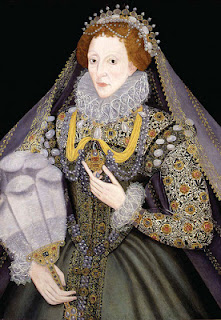 The Tudor atmosphere gave me a great starting conflict, but I needed more. I threw a new twist into the story. Kindar, like Elizabeth the First, had to rely on her own wits to survive, but I created Kindar with another strike against her. Kindar has a disease. Disease in the middle ages was a judgment sent against you by God. God found you flawed, morally or spiritually, and He marked you in a way to show the world your faults. It made Kindar even more shunned by her family and everyone around her.

Then I added a dose of murder, having the eldest daughter in the Mary role killed. Suspicion naturally falls on the next daughter in line. A daughter with a sickness that makes her worthless, but whose desire to rule is well-known. Suddenly, Kindar is under arrest. A pressure that sends her running to find a cure and the rest is history, so to speak.

So in what way have you stolen or transformed history to suit your story needs?
Posted by Michelle 4 Laughs at 3:56 PM