A Review of The High Druid's Blade 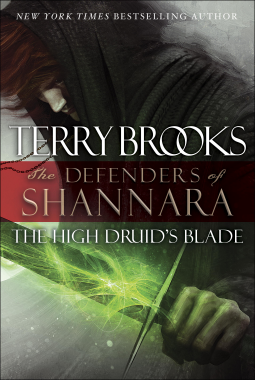 Four out of five stars.

I first read Terry Brooks as an older teen on vacation in Nebraska visiting my grandparents. There really wasn’t much else for a shy girl to do in Nebraska but immerse herself in reading. It was my first venture into epic fantasy as most of my other picks were classics. The Sword of Shannara was unlike anything I’d ever read before and it hooked me on the fantasy genre forever after, making me a lifetime fan of Terry Brooks.

Now as an adult and a fantasy writer, I welcomed the chance to preview the latest Shannara novel. A chance I was given by Net Galley. (If you don’t know Net Galley, you should. It’s a review service where librarians, teachers, and reviewers can get advance copies in exchange for their opinion on the books.)

The High Druid’s Blade is more the saga of the main character’s life than the usual quest. Paxon Leah is a descendant of both the Leah and Ohmsford families and has inherited the famous Blade of Leah.  When his sister is kidnapped by the evil sorcerer, Arcannen, Paxon must discover the magic that rests in the blade and free his sister. Everything grows more complicated as Paxon is invited to become a protector of the famous druids.

This book is full of twists and turns, some of which were predictable, but that didn’t limit the fun of the read.  Plenty of magic and plenty of action! I was glad to see a departure from the usual formula in the Shannara books. No big quest to save the world, instead more development on the inner life of the druids at Paranor and the politics behind the Federation. More focus on the life of the main character as he finds his place in the world. Vulnerable and uncertain, Paxon is a hero in the making.

In Arcannen, Brooks has the makings of one of his more complex villains. This guy knows how to take a bad situation and make it worse.

The only complaint would be the amount of distance from the characters. Instead of being shown their personality thought their actions or conversations, we were told all about them. While a quicker way to get things done which no doubt saved on word count, this kept me from discovering the characters for myself and instead spoon-feed me their life stories. Often whole scenes and events were skimmed over with summaries instead of being full of life and details.As for instance Paxon's training to be a druid protector.

It made the characters feel a little flat and kept me having a true connection with them. But as that has been the style of writing since the beginning of the Shannara series, it’s a small tradeoff to make for another adventure in this old friend world of magic.
Posted by Michelle 4 Laughs at 6:00 AM