Getting the Call with Nicole Byers

I hope nobody is getting tired of these contest success stories. I'm sure not! Let the good news continue! Here is another one for Nicole Byers and her adult horror WEEL from Query Kombat! You can find the entry for WEEL here.

Congrats to Nicole! Let's hope Nightmare on Query Street has as many happy outcomes. 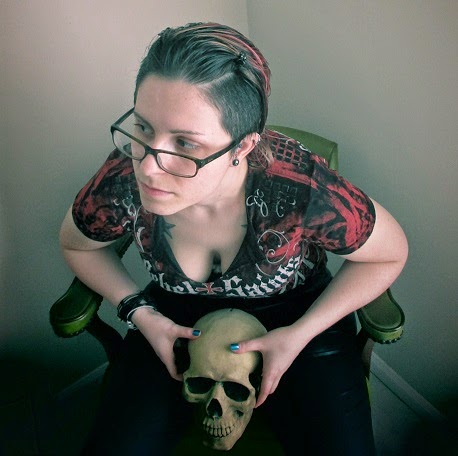 It was a few months into 2014 and one of my friends linked me to a contest on Twitter called Pitch Slam. This pretty much told me I needed to stop sitting on my butt and actually get my manuscript (titled WHO’S EATING ERIC LYNCH?) out there if I wanted to make anything of myself. Now, keep in mind I’d never used Twitter before, nor have I sent any part of my manuscript to an agent or a contest. “I’ll take this nice and slow,” I told myself. I didn’t want to get too excited, because I knew how discouraged I get when something I crave that hard doesn’t work out.

Well, there I sat, nose inches from the monitor for a good solid week while this contest came and went. Hopes high but expecting disaster, I actually made it into the contest as what the judges called a “Rebel Roadie”: an entry they didn’t think would get agent requests because it was a bit “out there,” but they liked it so much they had to include it in the contest. Long story short, I ended up with 2 partials. Nothing came of those requests but it was nice knowing people enjoyed my story, especially agents. It was maybe even a bit intoxicating.

That same friend sent me a link for Query Kombat. I’d never written a query before, have only read about them and took a few peeks at some example successful queries. I wrote one for the requests from Pitch Slam, but I had no idea how good mine was. So I thought I might as well send it in to Query Kombat. Perfect chance for some query feedback, right? Just had to hope I’d make it in.

Well, out of all those Query Kombat entries, my query and first 250 words made it into the contest! YUS! Being a horror writer, I felt a little out of my element when surrounded by all the YA, fantasy, and contemporary stories, but that was fine…I was in! My Query Kombat run took me to round 3, and I ended up with a partial request from the one agent I had my eyes on throughout the contest.

Unfortunately, much like Pitch Slam, nothing much came of that request. However, the suggestions and feedback I received for my query were invaluable. Seeing how many people loved my narrator’s voice made me feel even more confident to start querying on my own. Time to take this newly polished query and see just how many agents I could woo, you know?

I compiled a list of about 30 agents who accepted horror and urban fantasy. During Query Kombat I received feedback of people telling me my genre would be a hard sell, but I didn’t let that deter me. After all, it might be about angels and demons, but that’s not really the selling point—it’s in the quirky, goofy, schizophrenic, deadbeat human narrator. I just needed to find an agent who saw that.

After sending the query and sample chapters to 8 agents, I ended up with a few partials. One of the agents passed but said she’d send it to another agent in the agency who might be interested. As rejections started to trickle in, I received a partial request (first 50 pages) from the agent who was passed my query. Three days later, she asked for a full. After a short conversation through a couple emails, a few days later she said she’d like to talk about my manuscript over the phone and wanted to know when I’d be available for “the call.”

Pretty much freaking out by this point (I was terrified I’d say something stupid or act like an idiot on the phone), later that night I spoke to Jo Schaffer of the Gandolfo Literary Management team. Most of my anxiety came from all the research I’d done on Jo ever since I sent her my partial. (I mean, c’mon, she’s a blackbelt. How cool is that?!) I’ll admit, I can be a total wreck on the phone. But after a few minutes of talking to Jo and hearing how nice and awesome she was, that anxiety gradually subsided and I realized I could just be myself. There aren’t many people who give off that type of vibe, so I could tell right away there was a connection. When she offered me representation, there were a couple explosions inside my head of “YES” and “OMIGOSH.”

Luckily I kept myself composed until I was off the phone. After that? I kinda walked around like a zombie before I realized what had happened.

So now, a few months into this writer/agent relationship, and after a couple rounds of edits where I rewrote a portion of my novel, my manuscript is in the submission process. I’m already so thankful for Jo and how she’s helped me punch and roundhouse kick my word-baby into shape. Can’t wait to one day cradle it in my arms as a fully realized dream. When that happens, I’m sure there’ll be plenty of screaming and cheering. Maybe even some more zombie-fied walking, too.