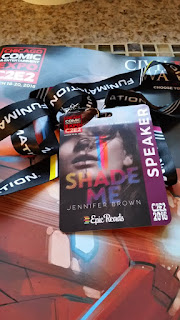 I took a trip to Chicago last weekend for the Chicago Comic and Entertainment Expo or C2E2. My publisher got a couple of us on panels, and I was scheduled to join five other authors from different publishers to talk about Fight the Power for one hour, with a book signing afterward. I'd never been to a Con, let alone one as big as this. For those who don't know, C2E2 is sort of like the grand-daddy of all SFF Cons in San Diego but with much fewer important announcements and premiers. You will still see a lot of this: 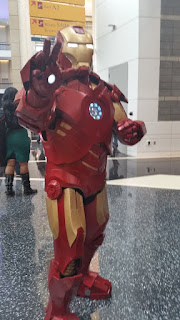 But there are not a lot of celebrities--at least not A-list ones. Still, the Con is huge with lots to see and do and there are huge crowds. You could walk among the vendors all day and not see it all. This will show how big it is: My sister and I got there before it opened for the day. We secured our badges, then went and got something to eat before getting in line. The line was like thirty people wide and I'm not kidding you that it took ten minutes after the doors opened for our part of the line to start moving. Ten minutes until we could even shuffle forward. There were just that many people waiting to get in. So a pretty big convention.

And I was going to speak in front of a crowd. This is what part of it looked like: 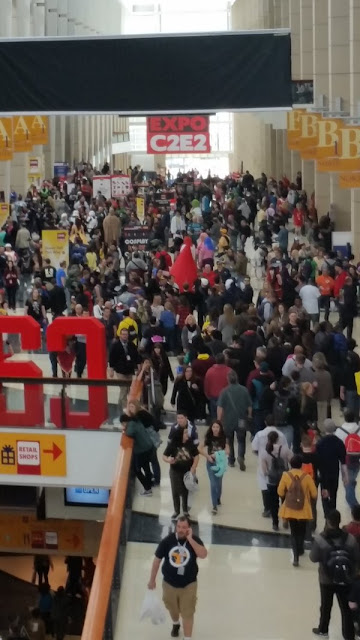 I was excited and plenty nervous. My stomach was feeling it on the drive up to Chicago. But the topic of my panel suited me so well so I also felt an edge of confidence. We were to answer questions on revolution in fiction and the little guy/underdog taking on the man. Right up my alley as a writer of epic fantasy! I write it and I've read dozens of books about it. I'd thought on the subject. And you know, once I got there, I forgot about being nervous. There was just so much to see and take pictures of! And I'm mainly talking about the people and the costumes. It was so crazy diverse and some of the costumes were just amazing. Look at this homemade Mad Max. It could be the real thing from the movie. 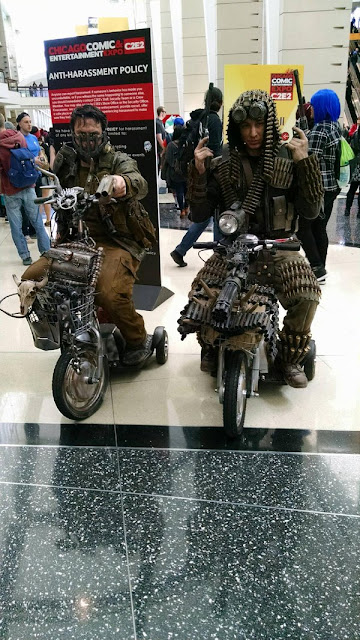 My panel wasn't until 12:30 and we had two hours to walk around and look at all the geeky things for sale. I bought a time turner necklace from Harry Potter and a Firefly t-shirt. My sister got two Walking Dead shirts. But the first thing we did was run to the Del Rey booth. Our Con program listed all the booths and had a map and we spent our time in line making a strategy. As soon as we got in, we went right--well not right, because we got lost a couple of times. It's like a maze in there.--for the book giveaway. I'd seen the day before that Del Rey was giving away copies of the new Michael J. Sullivan ARC. Thank you twitter for that tip! But freebies go fast. We got five or six books each and we're able to go back an hour later and get one of them signed. 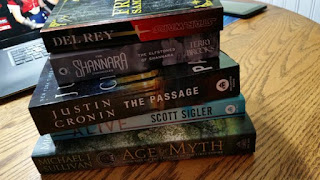 We didn't get to check out a quarter of the booths or artists in Artist Alley before it was time to head upstairs where the panel rooms are located. We passed this on the escalator. (Went passed Angimon from Digimon and his big wings on the way back down. Wish I had a picture.) 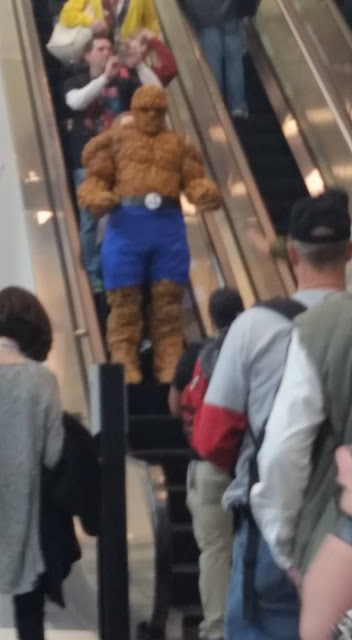 Oh and I found Rey. She was in the lobby. Who knew? 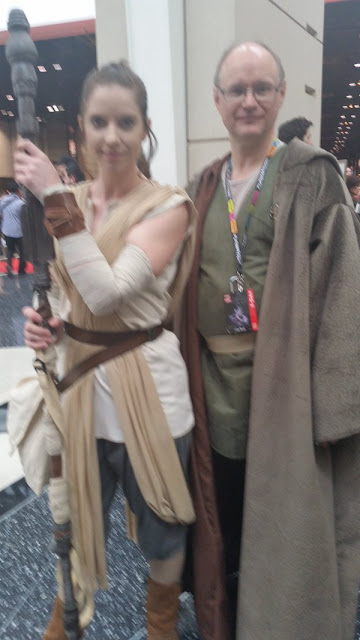 So yes. The panel. My nerves all came back. Sweaty hands and all that stuff. I was worried about using a microphone. Nervous about knowing what to say. Nervous about blabbering a bunch of boring crap. But it went well. The moderator introduced us and let us say three things about ourselves. Then she took audience questions and gave us all time to answer them. I let the first one pass me by, but jumped in on the second. I believe I made a few good points like about how characters manage to face such huge and overwhelming stakes.

I was very glad that at the last minute I packed one of my books into my bag. Here's a tip: you want a book with you to put up on the panel table. It makes you feel impressive. Oh and take someone with you. A big thanks to my sister for holding my hand and holding my bag full of free books!

All the other panelists with me had done talks at lots of conventions before. One was a full-time writer with over thirty books out. I'm looking at you, Rachel. They were all very encouraging of the newbie among them. I can't thank Arwen, Lisa, Rachel, and Michi enough for that. It went really fast and was soon over. We headed back downstairs to the Con floor for the signing.

There was a really long line waiting for signatures. Unfortunately, that line belong to the comic book person at the table next to us. Another tip: Fan conventions aren't really the place to get noticed unless you already have a big following. If you're new, you're just going to be a blip.

I spread out my bookmarks and stood up my copy of Grudging and I signed a few books. Met a few friends from twitter. (Hi Ann and Jane!) But the other highlight from the signing was spending the time talking with another author from Harper Voyager (Hi Bishop! Thanks for keeping me company.) and the authors from my panel. Talking with authors who understand you is such a bonus!

After the signing, my sister and I hurried back upstairs to catch Bishop's panel. He was a moderator. Talk about nervous. At least I didn't have that worry! By then it was later into the afternoon. We took a few more pictures of cosplay and headed home. As we were going out, my favorite cosplay of the day was right in front of me waiting for the escalator. I think I squealed and scared my sister when I saw Toph from the Last Avatar in front of me. She looks perfect and really ended the day on a high note! 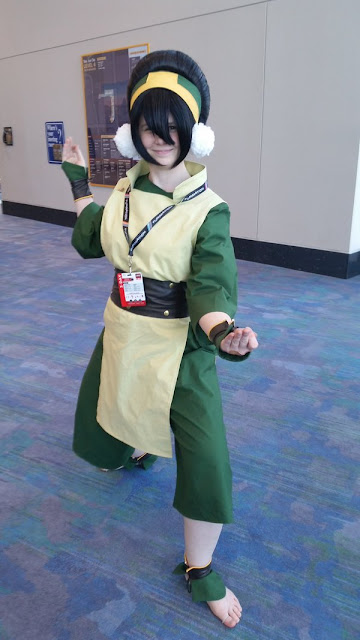 So keep in mind that most of the people at fan conventions, at least SFF ones, are there for the comics and the merchandise, not for books or authors. There were about 50 to 60 people at my panel. Cons are more for having fun, getting some experience, meeting people and mingling, and less about selling books. I took so many photos, had a blast, and would gladly do it again.
Posted by Michelle 4 Laughs at 8:33 AM