Getting the Call with Ellie Moreton

I always feel bad when an entry doesn't get any requests in a contest, but it's far from the end of the road. There's so much more to contests! I'm so glad Ellie picked herself up and kept moving forward. Now, she gets to share her success story. 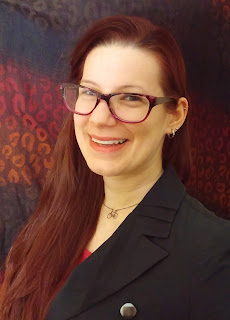 When I first started writing the book that got me my agent, I was in a slump from giving up querying my first MS. I trunked it and felt so empty inside. I had worked on that first manuscript for years, it was my baby, and I just didn’t know how to fix it. I had a few ideas for a new MS, but nothing really SPOKE to me. Nothing was shiny enough. Nothing SPARKLED.

Until I had a dream. It was only a short scene, but the feeling it gave inspired my new MS. I started thinking about the feeling and imagery. I started questioning what was going on, why, who? Until my mind was consumed with this world and the characters. I started writing it in May 2014. I finished it in December and sent it off to CPs and Betas.

I started querying and joined The Writer’s Voice contest. I got picked for Monica and Stephanie’s team, and was so ecstatic. When the agent round came, I didn’t get any requests. None. But I made a lot of great friends, and continued my journey.

In late October, after a good  amount of requests and an even larger abundance of Rejections, I got my first offer. I was ecstatic. I flailed and messaged all my CPs and friends and flails some more.

Then I put on my professional pants and asked for two weeks, Nov 4th, for other agents to get back and to contact their other authors. This was a bit of an odd circumstance because the agent couldn’t talk to me on the phone between their scheduled events at the time, and was also talking to me through an assistant.

The following week, I got my second offer! This was an agent who only had my query when I followed up with my offer of rep. She immediately asked for the full. (This is why it’s so important to send out notices to all the agents, even those who have just your query.)

We talked on the phone and I was super awkward. Everything in my brain just dumped out and I was so scared she would realize that I was a flailing phony and walk away slowly. She asked me if I wrote anything else, and I was like ‘no’ and then immediately remembered I co-write a space opera on wattpad and facepalmed a million times. My brain was just mush. The questions I researched and printed out were a garble of words in front of me.

But she didn’t back away! The notes she gave and what she told me about her vision for the book just made me feel so… good. She loved my Manuscript! My words! She liked them! She really liked them! I felt like this was how it should be with an agent, and that was pretty much when I made my decision to go with her.

On November 4th. I emailed and accepted her offer. Within the week, I had signed and emailed back the contract and was officially represented by the wonderful Christa Heschke at the McIntosh & Otis Agency!

It took me 7 months to write my book. And then another seven months to get my agent. Let’s see if the future brings some more lucky 7s.

Born and (mostly) raised in Plymouth, Massachusetts, Ellie was usually found outside, building forts and having stick fights with the neighborhood kids. (She always won.) After majoring in graphic design in High school, with the dream of becoming a manga-ka, she went to college for Media Arts & Animation in Brookline, MA, where she got her Bachelor’s degree before she found a job in Accounting, (Yeah, weird) and also started to seriously read and write. She still doodles and draws on random scraps of papers, sticky notes, and whatever else is around.

She currently resides right outside of Boston with her boyfriend and Cat.