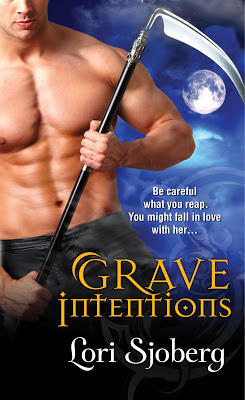 This morning I woke to a pleasant surprise. My book preorder had arrived for my kindle, waiting to be read. I'm so happy to announce the release day for my friend Lori Sjoberg's, Grave Intentions. I had the privilege of reading a bit of this during an AQC Speculative fiction feedback marathon, and I know I'm in for a treat. Now here's your chance to share the treat from Lori herself:

Thanks so much, Michelle, for helping me celebrate the release of Grave Intentions! (And I'm so looking forward to celebrating the upcoming release of Kindar's Cure as well!) To mark the occasion, I'm giving away a free copy via amazon or B&N (winner's choice). All you have to do is leave a comment below about your favorite read of 2012. Good luck!

Edit: The contest will end on January 8th.

One act of mercy before dying was all it took to turn soldier David Anderson into a reaper—an immortal who guides souls-of-untimely-death into the afterlife. But the closer he gets to atoning for his mortal sin and finally escaping merciless Fate, the more he feels his own humanity slipping away for good. Until he encounters Sarah Griffith. This skeptical scientist can’t be influenced by his powers—even though she has an unsuspected talent for sensing the dead. And her honesty and irreverent sense of humor reignite his reason for living—and a passion he can’t afford to feel. Now Fate has summoned David to make a devastating last harvest. And he’ll break every hellishly-strict netherworld rule to save Sarah…and gamble on a choice even an immortal can’t win.

No, Death was the consummate workaholic, more steadfast and diligent than the U.S. Postal Service. Neither snow nor rain nor heat nor gloom of night stayed the agents of Death from the swift completion of their appointed rounds.

Always the professional, Death never discriminated, taking young and old, weak and strong, healthy and infirm. It couldn’t be bought, or bullied, or reasoned with. Death had a mission and come Hell or high water, it would be accomplished.

For David Anderson, today was an easy day. As one of Death’s more seasoned agents, he’d been given the task of training the newest inductee in the tools of the trade. And with only two terminations on the day’s docket, it wouldn’t take too long to drink the memories away.

He looked down, checking his watch. Shit. Time to move. He gulped the last of his soda then crumpled the can and tossed it in the trashcan near the curb.

“Let’s roll,” he told Adam Javorski, his latest trainee. He gave a slight nod to the left before sliding on a pair of dark tinted sunglasses. “We’re due for our appointment.”

David’s gaze slanted over to his apprentice. The kid looked bright enough. Tall and rangy, with sharp brown eyes and distinctive Eastern European features, he had the look of a man always on the watch for trouble. Which made sense. He’d been a cop in his mortal life, fiercely dedicated to protecting and serving. Well, up until his last assignment, which is what led to his current situation.

“So when’s this going down?” Adam asked with a youthful exuberance, and David let out a mental groan.

Newbies. He couldn’t remember a time when he’d ever been that green. Stopping at the bustling intersection, he closed his eyes and focused inward, tuning out the sounds of early rush hour in downtown Orlando. “Not for another seven or eight minutes,” he said, homing in on the low-grade buzz pulsing through his veins. The vibration was barely distinguishable, but nevertheless, it was there.

“I can feel it.” When the light changed, they crossed over to Washington. The last thing David wanted was to be late so he picked up the pace, moving around a homeless man camped out on the sidewalk, a foul odor radiating from the overflowing shopping cart holding all of his worldly possessions.

Adam glanced over at him, a bewildered expression on his face. “You can feel death?”

“Of course.” Then he remembered mortals couldn’t feel death, couldn’t scent mortality like a bloodhound. He cursed under his breath. It had been so damn long since he’d drawn mortal breath he was beginning to forget the little things. Or was it more of a choice? He suspected it was the latter.

“How?” Adam asked, intrigued. “What does it feel like?”

The pair cut through the park, paying no attention to the cluster of small children squealing with glee as they tossed chunks of bread to a trio of greedy mallards. They were close now; David could feel it. The buzzing had intensified, growing stronger and more insistent as it rumbled inexorably toward its macabre crescendo.

Deciding they had enough time for a quick lesson, David came to an abrupt halt at the edge of the park and Adam quickly followed suit. “Close your eyes,” he ordered his trainee.

Patience was never one of David’s strong points. He gritted his teeth and counted to ten. “Just close your eyes, dammit, I’m trying to teach you something.”

Adam shot him a guarded look but complied without further question or comment.

“Now quiet your mind. Ignore everything but the sound of my voice.”

“Do you notice a low hum in the background?”

“I thought you said to ignore everything but the sound of your voice.”

David let out a low growl before clamping down on his temper. “I did,” he said, jaw clenched. “But now I’m telling you to listen for the hum. Can you hear it or feel it?”

Adam stayed silent for what seemed like forever. Then his expression shifted to one of near wonder. “I feel it! It’s kind of like a low electrical current, right?”

For the first time in days, David smiled. The kid might not be a lost cause after all. “Yes. Very good. That’s what you need to focus on. The stronger the sensation, the closer you are to the point of death.”

He paused to scan the area, making sure no one noticed. Of course, he had nothing to worry about. People were such creatures of habit, scurrying about their daily lives, oblivious to the forces working around them. Tourists snapped pictures in front of the fountain while locals hurried along the sidewalk, eager to reach their destinations. A bus eased up to the curb and opened its doors, letting passengers off while others waited to board.

Adam opened his eyes. “How’s this going down?” he asked, his eyes scouring the scenery, searching for any traces of imminent doom.

“I have no idea,” David replied, leaning back against a weathered oak. He watched the bus pull away from the curb, spewing out a cloud of noxious exhaust as it merged into traffic. Out of habit, he checked the time again. Less than a minute.

“What do you mean, you don’t know?” Adam’s brows crinkled. “I thought you knew what was going to happen.”

David shook his head and felt a trickle of sweat run past his temple. So much for fall in Florida. Late October, and the temperatures were still cranked above ninety. “Nope. The docket only gives a place and approximate time.” He watched while Adam’s face scrunched up in obvious confusion. He vaguely remembered giving his handler the same expression when he was new, so he decided to fill in the blanks. “Look, if you really want to know the exact details ahead of time, you can request it. But from my experience, you’re better off knowing as little as possible.”

As far as he was concerned, the less he knew, the less he had to purge from his mind afterward. Just how many times had he stared into the face of death? To be honest, he’d lost count. Maybe that was for the best, too. In his six decades of harvesting souls, he’d witnessed every act of savagery known to man. First, he’d been shocked. Then revolted. Eventually, he’d gone numb. Now he viewed the world through the jaded eyes of an ambivalent spectator, always watching from a comfortable distance.

The sound of tires screeching jerked him from his thoughts. Like countless times before, familiar events unfolded. Horns blared, tires screeched, and metal crunched against metal in a twisted symphony. Somewhere in the distance, a woman screamed. And then everything grew quiet, leaving only the smell of burnt rubber and the faint whimper of the dying.

Time to get to work.