Thanks to Eleri Stone for alerting us to some overlooked fantasy books. Her book REAPER'S TOUCH was released February 10, 2014. 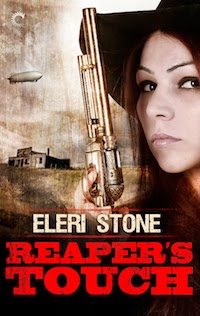 Abby is a Ranger, part of an elite group who defend the border against Reapers-humans infected with a parasite that turns them into mindless cannibals. Rangers are immune to Reaper infection, and as one of the only female Rangers, Abby is expected to settle down and breed more Rangers-a fate she's keen to avoid. When she's ambushed on the plains, she's ready to go out with guns blazing-until a mysterious, handsome cowboy rides to her rescue.

Jake has his own motives for helping Abby, beyond aiding a damsel in distress. He's a Reaper, and while he's learned to wrest control of his mind from the parasite, the effects won't last without a permanent cure. And he needs Abby to get it.

Abby and Jake are natural enemies and unlikely partners. But when their search reveals a conspiracy between Reapers and the rich industrialists who own the mountain cities, they must work together to find the cure-or lose the border, and each other, forever.

There are all sorts of reasons that great fantasy books might be overlooked. Whether they’re early works by well known authors, genre mashups that were mis-marketed, or self-published gems that haven’t found traction yet, some books just don’t find their way into the hands of the people who are out there looking for them. So, for the fantasy fan who wants something a little off the beaten path, here’s a list of the top five fantasy books you’ve never read (but really should).

Robin McKinley is very well known for her fairy-tale retellings and young adult books so Sunshine, her vampire urban fantasy, often gets missed by adult fantasy fans. It doesn’t really help that it’s a vampire story that was published during a time when a bazillion other vampire stories were coming out. Sunshine isn’t really a vampire romance though, nor is it a young adult novel. It leans more toward the horror side of fantasy and takes place in a contemporary urban setting some time after a magic apocalypse called the Voodoo Wars brought the Others (vampires, werewolves...) out of hiding.

Rae Seddon, Sunshine, is a talented baker(the Cinnamon Roll Queen!) who finds herself chained in an abandoned house to an old vampire named Constantine. Their captors want Constantine to break his long human fast and join their cause. Rae and Constantine manage to escape and then form a strange partnership to fight against their common enemy.

Good writing, evil vampires, an engaging heroine, and an interesting world that feels very complex even though you only get to see the surface of it in this standalone book. Unfortunately, no sequel.

Master of Crows by Grace Draven

This book was originally published by a small press and then later self-published by the author.

Silhara is a rogue mage who has been chosen as the intended vessel for the next reincarnation of the dark god, Corruption. Silhara is understandably anxious to find a way to escape that fate and he requests help from the Conclave of mage-priests (who dislike Silhara immensely). They send him Martise, a bondswoman with training in archaic languages. She arrives at Silhara’s gothically crumbling estate to help him search through a bunch of ancient texts for a way to kill the god…and also to provide the Conclave with proof of Silhara’s treachery in exchange for her freedom.

This is a rare find—a good historical fantasy combined with a strong character-driven romance. In most fantasy romance, either the romance or the fantasy takes over the story but this one has a really nice balance.

Cherie Priest is such a brilliant writer. This book is an earlier work, a little unusual, and often gets missed.

Dreadful Skin is a horror fantasy about a hard-as-nails nun who chases a werewolf through the old west. It's told from multiple perspectives in the first person which sounds annoying but really suits the story.

Actually scary werewolves, complicated and flawed characters, excellent writing.
This quote is from the back of the book and it’s better than any pitch I could possibly come up with:

“I ducked into a niche between a cabin and the pilot house and hiked my skirt up enough to reach down into my garter holster. I’ve heard it said that God made all men, but Samuel Colt made all men equal. We’d see what Mr. Colt could do for a woman.”

The Fever series is widely read in romance circles but virtually ignored by the fantasy crowd. That is truly a shame because it’s very solidly urban fantasy, not romance.

The first book begins with an innocent young woman (think Alicia Silverstone in Clueless) whose sister is murdered in Dublin under mysterious circumstances. Mac, the heroine, travels to Ireland to find out what happened to her sister and stumbles into a nightmare. Dark Fae are preparing to invade the human world and Mac's ability to find a powerful book is the only thing that might be able to prevent the apocalypse.

Gutsy storytelling—there are no pulled punches in this series and every time you think the story cannot possibly go in a darker direction, it does. Combine that with morally ambiguous characters, loads of sexual tension, and a huge—but believable—character arc for the heroine. If you hate the heroine in the very beginning—and you probably will—just hang in there for a bit. 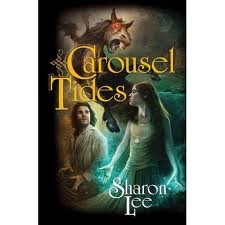 Sharon Lee is especially well known for the Liaden Universe science fiction books that she co-writes with her husband, Steve Miller. In a departure from that, Carousel Tides is a wonderful gem of a contemporary fantasy.

Kate Archer returns to her childhood home, an amusement park in coastal Maine. Her grandmother has disappeared, leaving Kate an inheritance that involves more responsibility—magical and mundane—than it does wealth. Kate has to keep the carousel running and discover what happened to her grandmother while making peace with her past.

There’s nothing really flashy about this one. It’s a quiet kind of fantasy that sort of sneaks up on you. What’s remarkable about Carousel Tides is how seamlessly the real and magical elements of the world are integrated and how well-drawn the secondary characters are. It makes for a rich, deep world that you’ll want to revisit. Fortunately, you’ll be able to do that because they decided to make it into a series.

Eleri Stone was born and raised in New Jersey. She graduated from the University of Iowa, married her college sweetheart, and settled in the Midwest where she still lives with her husband and their three children. A lifelong fan of fantasy, she started reading romance as an adult and was instantly captivated by the strong female protagonists, character-driven storylines and guarantee of a happy-ever-after. Writing fantasy and paranormal romance, she is the author of REAPER’S TOUCH, a cowboy and zombie romance mashup as well as paranormal and fantasy romance series THE LOST CITY SHIFTERS and TWILIGHT OF THE GODS.