Short stories aren't only about filling out an author's bio, they let a writer use their imagination to write about situations and characters they normally wouldn't get to explore.

Four great authors and one great book! As we are four friends who also happen to be published in the same collection of short stories, Summer's Double Edge, we wanted to share a little something about ourselves and our writing. 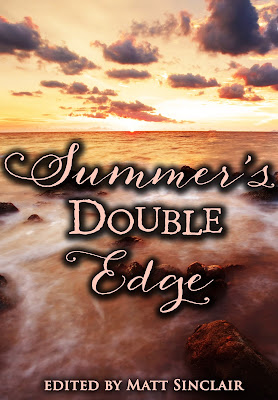 What background do you  have writing short stories?

Jean Oram: My short story background consists of two short stories. My first one which was "Crumbs" found in The Fall: Tales From the Apocalypse where I wrote about a woman who finally finds the courage to find love--at the end of the world. It was a fun challenge as Matt Sinclair, the editor and publisher provided the theme of hope at the end of the world. I hadn't written a short story since grade nine--and that was with a friend in class and wasn't much of a story! (We were actually just trying to get a rise out of the teacher with our assignment. You know... 14. Oh boy.) I enjoyed trying to write a romance set during an apocalypse. So many things were incongruent I think it actually kind of worked!

My second short story is "Gown For Sale" which almost reads like a poem and is in Summer's Double Edge. Again, I had the theme from Matt and had it mulling about in my head. While trying to sleep one night the story of a jilted bride-to-be came to mind and out came this 460 word story.

MarcyKate Connolly: I dabbled with them a lot in high school and college, but never pursued publishing them. Mostly my brain works in long form. I think it’s because I love to plot. J However, when the call went out for submissions to EBP’s first anthology, Spring Fevers, I had an idea for one and decided to give it a shot. That turned out to be “Connected” and I was delighted they accepted it. When I heard the theme for Summer’s Double Edge, it also struck a chord with me, and led to the spark that became “Don’t Pet the Ghosts.”


Amy Trueblood: I started writing short stories a few years ago as part of a creative writing class project.  While the process was daunting at first, I quickly fell in love with the challenge of writing a story in less than 10,000 words. My first short story ever published was in Liquid Imagination. A few months after that I was lucky enough to have a story published in The Fall, the second anthology from Elephant's Bookshelf  Press. A third short story I've written called, Departures, will appear as part of a blog project created by fellow writer, Carey Torgesen.

Michelle Hauck: Since I'm a one project at a time writer, Frost and Fog is the only short story I've even written just to please myself. I've written some flash fiction for Webook contests, which had to follow a suggested theme. I wrote two other shorts based on small contests in the AQC Speculative Fiction Forum. Both of those also had suggested themes, and I eventually turned them into full-length stories.

When I saw Elephant's Bookshelf's call for shorts, I wasn't sure if Frost and Fog would be a good fit. But it was accepted!

How does a short story differ from a full length novel, and how are they the same?

Jean Oram: I think a short story and a novel are the same in so many ways. A good short story has a beginning, middle, and end. The character should change in some way over the course of the story. You still need characterization, plot, setting, etc., and hopefully create some sort of emotional investment in the reader (the hardest part of a short story, I think) as well as a connection. On the flip side, I think they differ in that you don't go as deep into characterization, setting, plot, etc. It is there, but isn't fully explored as it is in a novel. Well, unless you are writing a longer short story, then you can dive in a bit more. But in a lot of ways, I see good short stories as a mini novel. Sort of a snippet of a full-length tale. Kind of like if our lives were a novel and a story of our day's misadventures was a short story pulled from within it. You still need characters, setting, a bit of backstory or something to ground the reader in who everyone is and what they want. You just cover less ground overall.

MarcyKate Connolly: The basics are the same—you need a main character, a catalyst, and plot—but it’s condensed. Pacing is usually tighter, and there’s often only one turning point.


Amy Trueblood: I think they are the same in the idea that you must have a fully-fleshed beginning, middle and end. Where they differ is with a short story you must measure your words, eliminating anything that doesn't move the plot forward.

Michelle Hauck: Like full length novels, shorts have to have a plot and/or character arc. The character's personality must change and grow over the course of the story. Unlike a full novel, you have to accomplish this fast. There is no time for a gradual transformation of a character, egged on by many small incidents. Usually a single dramatic event takes place like a blow to the stomach to knock the character into changing. Which means, the ending can often be messier than the happily ever after of a novel.

Jean Oram loves to write women's fiction and romance and is currently giving her first novel, Champagne and Lemon Drops, away for free as an ebook (online everywhere!). She will be releasing book two Fall 2013 and has also been known to write short stories such as "Gown For Sale" which can be found in Summer's Double Edge. You can find her at www.jeanoram.com.

Gown For Sale is a story about love and betrayal and the struggle to move on and find peace with oneself and the ones you love--even when they break your heart.

MarcyKate Connolly is an author who lives in New England with her husband and pugs and writes weird little books. She’s also a coffee addict, voracious reader, and recurring commuter. She blogs about all those things and more at MarcyKate.com, and can often be found on Twitter. Her work is represented by Suzie Townsend of New Leaf Literary & Media, and her debut upper middle grade fantasy novel, MONSTROUS, will be published by HarperCollins Children’s Books in Winter 2015.

“Don’t Pet the Ghosts” is a short story about a ghost and a girl who cross paths in a graveyard, and how that changes their lives in unexpected ways.

Amy is a freelance writer with over fifteen years of experience in marketing and public relations. When not “chasing the crazy” dream of being published, she feeds her addictions to good TV (Bones, Castle & Fringe), books, and mango ice tea. She blogs regularly atwww.chasingthecrazies.wordpress.com and can be found chatting about books, music and writing on Twitter (@atrueblood5).

When two archaeologists, with a tumultuous past, are assigned to a new dig, they discover a long hidden secret that unearths feelings they've both kept buried for years.

Michelle Hauck lives in the bustling metropolis of northern Indiana with her hubby and two teenagers. Besides working with special needs children by day, she writes all sorts of fantasy, giving her imagination free range. A book worm, she passes up the darker vices in favor of chocolate and looks for any excuse to reward herself. Bio finished? Time for a sweet snack. Her epic fantasy, KINDAR’S CURE, is to be published by Divertir Publishing in 2013. Find her at her blog: It’s in the Details or on twitter.

'Frost and Fog' is a story about lumberjacks trying to eke out a living, and instead finding something that changes their lives forever.
Posted by Michelle 4 Laughs at 12:00 PM