Note: Danielle Smith is no longer an agent.

Today I'm very pleased to bring you answers from new agent, Danielle Smith now with The Red Fox Literary Agency. Thank you so much Ms. Smith for taking the time to respond and maybe ease some fears about the query process.


Is there a particular time of year that is better to query?
So far, not that I can tell. I've been told summer is slower in publishing, but from what I can tell it's just as busy as the rest of the year.
Does one typo or misplaced comma shoot down the entire query?
Not at all. Now if there are multiple errors that's another story.
Do you look at sample pages without fail or only if the query is strong?
Almost always.
Do crazy fonts caused by email gremlins make for an automatic rejection?
No, but I am not at all a fan of crazy colors or weird google avatars. You'd be shocked by the number of semi-nude google avatars people have. If I were an agent that representing anything other than children's books this might be something to overlook, but I only work with children's literature.
Do you prefer a little personalized chit-chat in a query letter, or would you rather hear about the manuscript?
I do prefer the query to be personalized. It shows me that the writer sending the query did their homework and isn't just sending out mass-queries.
Does it matter whether the word count/genre information is first or last in a query?
I prefer most queries to be set up in some variation of this format: "The hook, the book and the cook." Three concise paragraphs and then the story.
Do you go through a large group of queries at a time or hold yourself to a few?
I generally set aside a large chunk of time to focus just on queries.
How many queries do you receive in a week? How many requests might you make out of those?
Anywhere from 50-150 depending on the week. Usually I'll make requests on between one to five of those.
Have you form rejected great projects you think could be accepted elsewhere or do you try to give some feedback?
I'm certain I have, it's inevitable in this business, but it's one of the great things about having so many great agents and editors out there. Not everything will work for everyone, but hard work and talent pay off when the right match is made.
Many agents say they don’t care if writers are active online. Could an active/known online presence by an author tip the scales in getting a request or offer?
Yes. It's without a doubt not a qualifier, but if someone has an active positive presence online it's something I will take into consideration when evaluating whether to take on a client. I recently even reached out to an author who wasn't represented yet based solely on how much I enjoyed their blog and interactions online.
What does ‘just didn’t connect enough’ mean to you?
Usually for me it means that I thought the writing was good, but for one reason or another the story didn't "sing" to me.

What themes are you sick of seeing?
Stories where the message is forced on the reader. Things like teaching lessons to children that could be told in subtle more creative ways.
What’s the strangest/funniest thing you’ve seen in a query?
I'd hate to say anything too specific for fear of hurting someone's feelings. Something pretty general (and strange to me) that happens frequently is addressing the query to a different agent, but sending it to me.
What three things are at the top of your submission wish list?
Magical realism mixed with food in an MG. (Think Sarah Addison Allen for tweens.)
Books featuring a multi-cultural cast or character without feeling like that's the focus of the story.
Sweet PBs featuring good sibling relationships or unique fairytale re-tellings.

What are some of your favorite movies or books to give us an idea of your tastes?
TV/Movies: BBC's Sherlock, Hannibal, Heroes, The Lord of the Rings trilogy and The Matrix series.
Books: Creepy Carrots by Aaron Reynolds, Millie Fierce by Jane Manning, In A Glass Grimmly by Adam Gidwitz and The Pellinor series by Alison Croggon. 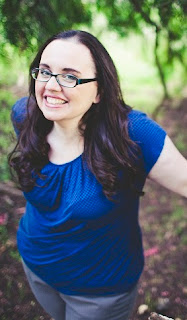 Smith is the well-known blogger behind the online review site There’s a Book, winner of the BBAW’s Best Kidlit Book Review Blog and host to over two-hundred thousand page views per month. Her children’s book reviews have also appeared in top online and print publications such as Parenting Magazine and Women’s World.

“Danielle’s influence among parents, teachers, librarians, booksellers, and other bloggers helped put us on the map,” says Kellie Celia, Marketing Communications Manager at HarperCollins imprint Walden Pond Press. “This speaks to the amount of respect the education, parent, and children’s book communities give Danielle. She has an eye for great authors and the relationships to take these authors to the next stage in their careers.”

Smith’s expertise in children’s literature led her to serve as a judge for The Cybils Awards from 2010 to 2012, and as a board member of The Central Coast Writer’s Conference and the BEA Book Bloggers Advisory.

“Danielle’s five years as a children’s book reviewer have given her an extensive knowledge of the current children’s book marketplace,” says Samoun. “Karen and I are excited to see her build her list of clients. We know that she’ll be bringing some amazing talent to the agency.”