Annika Sharma is here to tell us a little about her book, growing up Indian-American, and how diversity in writing effects her. THE REARRANGED LIFE releases May 15th from Curiosity Quills Press. 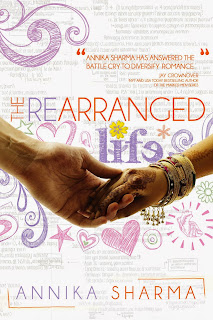 Note: you’re going to have to excuse this debut’s seemingly epiphanic ramblings. And the fact that I’m starting this story off with two negative experiences—I promise, as an eternal optimist, I will turn it around quickly.

A former co-worker (#1) used to make racial comments on a fairly regular basis to a Hispanic colleague and myself (an Indian-American). During my farewell dinner when I left the job, another colleague (#2) asked if I wanted to invite #1 along. I said they were welcome to, however her racial comments made us feel uncomfortable and sometimes that was tough to be around. #2 quit speaking to me after that dinner. Recently, I found out it was because I “was mad at white people and had turned dinner into a race issue,” when I spoke up. Unrelated to the first incident, I later heard someone say my upcoming book should have been more original because I was Indian, so a guy and girl meeting in a college setting was a bit boring. While I understand the well-meaning intention behind that statement—that coming from a colorful culture should bring an equally entertaining story—a piece of me thought, “but I’m Indian and I am boring enough to meet people like everyone else…”

Okay, negativity over. Admittedly, my identity crisis issues are on par with everyone else. 99% of the time, I am comfortable in my brown skin. I love the fact that I was blessed with two cultures—a fun American one and a rich Indian one. Doubly lucky! They rarely pose problems for me unless I’m blatantly faced with them, like above. But with the rare experiences like the ones I just described, I’m sure you can see that sometimes, expectations are set: it’s okay to be a different skin color and stand out until you bring it up as the reason why you’re standing out, and simultaneously if you’re from an “exotic” place, you’re supposed to live life like a magical unicorn. It sets the bar quite high. It often blurs a line between acceptable and not. It’s no surprise that my two biggest fears in releasing this story were that, one, my story would be seen as weird because it had some cultural differences, and two, that no one would be able to relate because it was Indian…Yet through it all, I’ve always read one piece of advice: write what you know.

It’s an age-old concept. A writer can put themselves into a character’s shoes if they’ve been there before, right? My debut novel, The Rearranged Life, is coming out on May 15th. Let’s talk about what I know.

·       Nithya, the protagonist, is an Indian-American—born of immigrant parents and raised in the United States. I was born in India and brought to the United States at the ripe old age of 16 months.
·       Nithya wants to be a doctor. So did I (then a nurse practitioner, teacher, and I’m still holding out hope on being an astronaut…but I digress).
·       She falls in love with an American. I grew up in central Pennsylvania where the ratio is approximately ten cows to a human, and diversity is not exactly...wide. If this hadn’t happened to me at least once, it would be a miracle.
·       She goes to Penn State. I am the holder of two degrees, two minors and a Master’s from the same school. The fact that it is in the middle of nowhere provided a fantastic bubble to lay down a story that has so many outside influences.
·       Her entire life is rearranged and transformed by one unexpected event. Did I mention that time I went to nursing school for a semester, hated it, and came home before deciding that now that everything had hit rock bottom, I had nothing to lose and I was going to fulfill my lifelong dream of being a writer? No? Well…let’s say I have a little experience in throwing caution to the wind when life has kicked my butt twelve ways to Sunday.
I’m sure most of you have had similar moments in your life: rebuilding yourself, falling in love, being challenged…they’re universal. But the context might be different in each of our stories. Underneath it all, we have very individual tales that similarities weave through. The context of my novel is at a major university in the United States, where a first-generation Indian girl deals with her family’s past and future crashing together. However, figuring yourself out and deciding what you want your future to look like? I’d venture most college students (or even most people!) feel the same way regardless of background. My goal was to bring two separate issues together…as most writers are apt to do.
I like to think I succeeded, at least in part (let’s face it, I probably made some mistakes, which I humbly apologize for now). I asked my friends in my writer group which scenes spoke to them most. Ara Grigorian (Game of Love) and Meredith Tate (Missing Pieces) said it was the wedding scene where Nithya describes each ritual to an American friend. Amanda Heger (Without Borders) mentioned a scene where Nithya flashes back to trips to India, because it was a location she had always wanted to visit. Laura Salters (Run Away) explained that she loved Nithya and James’ first date where they realize their families are similar and relatable, despite the fact that their backgrounds and traditions were very different.

My brain practically exploded into a thousand sari-colored pieces. The very cultural elements I was anxious about bringing to the page were the ones they loved the most. People were valuing the difference that had previously set me apart. It left me with my final epiphany: that even though being Indian has, in the past, made me feel a little out of place sometimes, at the end of the day, it is exactly what ties me to the world.

And that got me thinking…if writers write what they know, and what they know is they might be a little “weird” in the eyes of the world for whatever reason—gender identity, sexual orientation, race, religious sect, clothing choices, political views, neurodiversity or a myriad of other things—then it must be tough for them to come forward. They have, either through personal experience or out of wanting to understand, pulled the skin off a burn in a very public way. I’ve seen so much talk of diversity in literature. I won’t pretend that answers are clear, or that I know any of them—I’m still learning everything I can. But the push to accept those who seem different to us is contingent upon one thing: people aren’t so different at all. And if they are, it’s okay to love them anyway. It’s okay to tell their stories and give them life. It means we’ve accepted them into our fold for their differences, not despite them. For someone who has struggled, the warmth of a hearty welcome can be a balm to that burn…one that might still be raw from confronting sensitive issues head-on.

When I wrote this story, a small piece of me thought, “People are going to see brown girl meets white guy, interracial romance, arranged marriage, and think she’s about to meet her husband on the altar and it’s going to feed so many misperceptions…” Putting the rare but real clash between my two cultures on the page was scary. There was a lot of room for the Indian side, the part of me that has been criticized already, to be judged hard. There was a lot of space for “us” and “them” conversations instead of, “We can be different and the same.” I was terrified people would think I was swinging the race card around. My burn was oozing with insecurity.

Instead, I heard something else. Something that transformed all of that fear and made me realize that while there are miles to go, we are on the right track and should continually improve.

And that, to this debut author, has made all the difference. 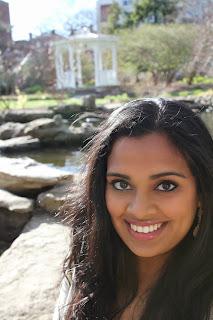 Annika Sharma was born in New Delhi and brought up in the United States, where she moved with her parents as a baby. A proud alum, she graduated from Penn State University with dual degrees in Biobehavioral Health and Neuro-Psychology, and minors in Biology and Human Development and Family Studies. She received her Master's degree in Early Childhood Special Education before pursuing her dreams of becoming a writer, landing her agent Stacey Donaghy of Donaghy Literary Group while daylighting as a preschool teacher. The Rearranged Life, her first novel, was written in the month before graduate school.
Annika, a Gryffindor and Scorpio, spends much of her time dreaming of adventure, working on her next book, going on Starbucks runs with family and friends, shopping online and watching superhero movies.
The Rearranged Life, will be hitting shelves on May 15th, 2015, published by Curiosity Quills Press.