Getting the Submission Call with Auston Habershaw

Did anyone every mention patience in the same sentence as publishing? Just wondering. No patience needed for your dose of inspiration this week. Auston is here to provide it! 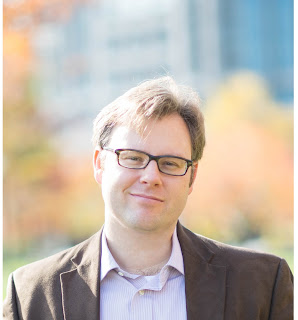 I Am the Glacier: A Call Story

I’ve wanted to be a professional science fiction and fantasy author for a long, long time—basically ever since I figured out that writing novels was a job that somebody could do for money. Yes, yes, I know—not very much money. I didn’t figure that out until much later.

In high school I wrote derivative fantasy fiction and bland space opera stories all based loosely off my experiences in RPGs like Dungeons & Dragons (yay AD&D 2nd Edition!). They were pretty much for myself and maybe my parents would listen—excellent learning experiences, but not anywhere near what they needed to be.

In college, I took as many creative writing workshops as I could, honing my craft, and for my senior honors thesis, I wrote a novel (a science fiction retelling of the Arthurian legend). Though I was very proud of it at the time, I can look back now and see how much I didn’t know and how much I had yet to grow as an author. That novel is an absolute train wreck, believe me.

After college, while the rest of my friends got steady jobs or pursued practical careers, I decided I was going to be a Novelist. I figured it would take a few years before I got my first book deal and then I’d be a pro and my troubles would be over.

I will pause here for the peals of laughter.

How about now? Okay.

I made that incredibly naïve decision in the year 2000. I took odd jobs and wrote my novels in my spare time. I eventually opted to get my MFA, figuring that if I was going to spend all my spare time writing anyway, I may as well earn a degree and see if it came in handy (it did—I now work as an English professor which makes my writing career far, far more practical). During this time, I wrote three more novels, each one better than the last one. The third one, The Oldest Trick, I felt was really very good.

I started by querying agents, a couple a week, for a few months. No bites. During this time, Harper Voyager had an open call for submissions, so I sent it. By this point it was the fall of 2012. I kept querying agents for a while, but still no bites—I figured there was something I was doing wrong. I had at this point also honed my short fiction game and was getting publications in small markets here and there. It encouraged me, kept me going. When I earned a semi-finalist finish in the Writers of the Future Contest (a prestigious international short fiction competition for SF/F), I resolved that quitting wasn’t ever going to be an option—I had the chops to be a pro, I just knew it. It was just a matter of getting the stars to align.

Harper sat on my book for 18 months. After about six months, I queried and got a stock response—yes, my book was still under consideration, thanks for your patience, etc.. After a year I queried again, and got a stock response again. But then, fifteen minutes after that response, I got a personal response from Kelly O’Connor, at that time an assistant editor at Harper Voyager. She told me they were very interested and to let them know if interest developed from elsewhere, but they still needed time to decide. Them telling me “let me know if interest developed from elsewhere” was a bit like dangling a full canteen of water in front of a starving man in the desert and saying “we’re really interested in giving you this, but let us know if you stumble across a lemonade stand.” I didn’t say anything, though. No begging, no cajoling, no over-enthusiastic squeals of glee. Like a hunter, the prey was in my sights and any sudden movement or noise might spook it. I kept a stiff upper lip and pressed on.

After the dawning of 2014, I shot Kelly an e-mail: “Hey, just me, author who is totally not obsessing over the fate of his novel in your hands—any news?” I was told that I would hear, one way or another, by the end of January 2014. I watched my calendar like a goddamned barn owl watches a mouse.

And I didn’t hear back until March. I got the call (well, the e-mail) in my cubicle at work, so hooting and hollering wasn’t really an option. Still, my hands trembled as I read the words “we’d love to publish your novel.” This was it—my life-long goal, finally realized. I called my wife first and then my mom. There was much rejoicing.

There were other things, too. First off, they wanted to split my book in half (too long, they felt). They also set me a deadline for the next book (I’d never actually written a novel on a deadline before—not really, anyway). I started to realize, somewhat to my horror, that getting a book deal was only the very beginning of my journey. I was starting out, not finishing. All that patience, all that gradual pressure, all that dedication to improving my craft, and that had only gotten me in the door. I now had to find my way out of the lobby.

But it’s okay, though—great, even. Learning patience and perseverance is essential to this whole writing gig. Yeah, I guess I could have self-published some of my earlier novels before I knew enough to know they weren’t up to snuff, but that wouldn’t have helped me in the long run (though your mileage may vary, of course). I needed all that time to improve, to hone, and, yes, to learn what I was made of. Now, even though I’m just starting out, I feel ready for what is coming for me, whatever that is. I know that, no matter what, I am going to press on. I honestly can’t imagine doing anything else. Writing is not running a race because you like to win, but rather one you run because you like running. 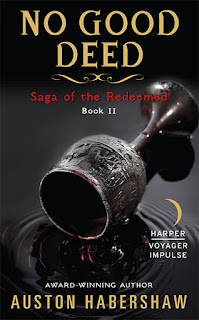 Cursed with a magic ring that forbids skullduggery, Tyvian Reldamar’s life of crime is sadly behind him. Now reduced to fencing moldy relics and wheedling favors from petty nobility, he’s pretty sure his life can’t get any worse.

That is until he hears that his old nemesis, Myreon Alafarr, has been framed for a crime she didn’t commit and turned to stone in a penitentiary garden. Somebody is trying to get his attention, and that somebody is playing a very high-stakes game that will draw Tyvian and his friends back to the city of his birth and right under the noses of the Defenders he’s been dodging for so long. And that isn’t even the worst part. The worst part is that the person pulling all the strings is none other than the most powerful sorceress in the West: Lyrelle Reldamar.