I just finished reading a series of novellas that I have to gush about. The Los Nefilim series is truly an undiscovered gem. Beautiful writing, deep world building, and engaging characters all in a fantastic story. And the main characters are in a long-term, committed LGBT relationship set in 1930's Spain, giving the books so much diversity. Everyone who wants to support diversity in SFF should flock to these fast-paced reads. 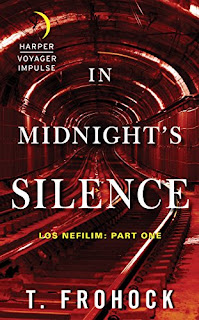 The fate of mankind has nothing to do with mankind…
Born of an angel and a daimon, Diago Alvarez is a singular being in a country torn by a looming civil war and the spiritual struggle between the forces of angels and daimons. With allegiance to no one but his partner Miquel, he is content to simply live in Barcelona, caring only for the man he loves and the music he makes. Yet, neither side is satisfied to let him lead this domesticated life and, knowing they can't get to him directly, they do the one thing he's always feared.
They go after Miquel.
Now, in order to save his lover's life, he is forced by an angel to perform a gruesome task: feed a child to the daimon Moloch in exchange for a coin that will limit the extent of the world's next war. The mission is fraught with danger, the time he has to accomplish it is limited…and the child he is to sacrifice is the son Diago never knew existed.
A lyrical tale in a world of music and magic, T. Frohock's In Midnight's Silence shows the lengths a man will go to save the people he loves, and the sides he'll choose when the sidelines are no longer an option.


Fast-paced is the word. As novellas there's none of that slow middle part with waiting for the action to develop and get underway. All three books fly from the first chapter. And each book builds upon the next, filling in more to the world, enlarging on the characters.

I usually roll my eyes for books about angels and demons, but there is nothing cliche about this series. They are rich with Spanish influence. Though they are supernatural beings, it's more about Diago's all too human choices. 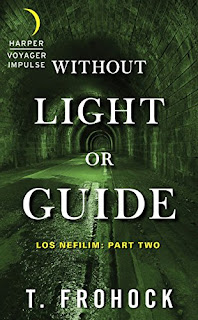 The fate of mankind has nothing to do with mankind…
Always holding themselves aloft from the affairs of mortals, Los Nefilim have thrived for eons. But with the Spanish Civil War looming, their fragile independence is shaken by the machinations of angels and daimons…and a half-breed caught in-between.
For although Diago Alvarez has pledged his loyalty to Los Nefilim, there are many who don't trust his daimonic blood. And with the re-emergence of his father—a Nefil who sold his soul to a daimon—the fear is Diago will soon follow the same path.
Yet even as Diago tries to prove his allegiance, events conspire that only fuel the other Nefilim's suspicions—including the fact that every mortal Diago has known in Barcelona is being brutally murdered.
The second novella in T. Frohock's Los Nefilim series, Without Light or Guide continues Diago's journey through a world he was born into, yet doesn't quite understand.

I flew through all three books in just a few days. And for someone on a budget, the price is amazing. Less than a dollar for each piece of the story. You can immerse yourself in a SFF world that makes you wish you were there for less than the cost of a visit to McDonald's.

My only regret is there isn't more when I finished The Second Death. YET! I really recommend this series. 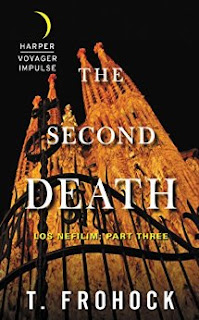 The final chapter in T. Frohock’s haunting and lyrical Los Nefilim novella trilogy--following In Midnight's Silence and Without Light or Guide--which bestselling author Mark Lawrence has called “a joy to read.”

Save the world, or save his family…
For Diago Alvarez, that’s the choice before him. For unless he wants to see his son Rafael die, he must do the unthinkable:
Help the Nazis receive the plans to the ultimate weapon.
And while Diago grows more comfortable not only with his heritage, but also with his place among Guillermo’s Los Nefilim, he is still unsure if he truly belongs amongst them.
In a frantic race to save the future of humanity, Diago is forced to rely on his daimonic nature to deceive an angel. In doing so, he discovers the birth of a modern god—one that will bring about a new world order from which no one can escape.
In Midnight's Silence|Without Light or Guide|The Second Death

T. Frohock has turned her love of dark fantasy and horror into tales of deliciously creepy fiction. She currently lives in North Carolina where she has long been accused of telling stories, which is a southern colloquialism for lying. Check out more of her works and news at www.tfrohock.com.
Posted by Michelle 4 Laughs at 8:00 AM