Before the agent round of Sun versus Snow is one of the agents helping to make the contest a success. A big thanks to Laura Zats of Red Sofa Literary!

Is there a better or worse time of year to query?
Not for me! No matter when you send me a query, I'll answer it. However, if you query in December/January or August/September, be prepared to wait a bit longer than during the rest of the year since it's when agents are busy getting submissions ready and there are also a lot of Twitter contests.
Does one typo or misplaced comma shoot down the entire query?
Everybody makes typos. If you've got one or two in a query, it's not a big deal. However, if you have LOTS, it says to me that you rushed through the query. I'm also a lot more harsh with incorrect homonyms, because it says to me that you're not educated in your craft.
Do you look at sample pages without fail or only if the query is strong?
Unfortunately not. No matter how great a query is, if it's a book that doesn't fall in my categories or one I wouldn't feel comfortable representing for any reason, I pass.
Do you have an assistant or intern go through your queries first or do you check all of them?
I look through every one of my queries, and if I request a partial or a full, I read it all and write a personalized response. It's why queries take so long to answer!
If the manuscript has a prologue, do you want it included with the sample pages?
NO! I actually have a well-documented bias against prologues. Not because I think they're bad, but because I think they're too often used by new authors to "cheat" in their opening pages. Writers hear all the time that their work starts about 30 pages too soon (they lead up to the action, versus dropping a reader in it), and prologues are used all too often to lead up to action when it's not needed. That's not to say that all prologues are bad, but for me it's better if they're left out.
Some agencies mention querying only one agent at a time and some say query only one agent period. How often do you pass a query along to a fellow agent who might be more interested?
Always! If I plan to pass on a book but I think it could do well with Jennie or Dawn, I give them a crack before I send a rejection letter, and they do the same for me.

Do you prefer a little personalized chit-chat in a query letter, or would you rather hear about the manuscript?
This depends. I like query letters to be personalized, because this tells me that I'm being queried because a writer actually thinks I'd be a good fit for their book, and not because they just found me on a search engine and included me in a huge mail blast. That being said, I care much more about  the MS than what your cat's name is (that is what Twitter is for).
Most agents have said they don’t care whether the word count/genre sentence comes first or last. But is it a red flag if one component is not included?
Absolutely. It tells me that you're either a) not following category/genre conventions and want to pull one over on me, or b) haven't done the necessary groundwork and research to understand the publishing industry and your audience.
Writers hear a lot about limiting the number of named characters in a query. Do you feel keeping named characters to a certain number makes for a clearer query?
In general, yes. When names get thrown about with no supporting information, I lose track of what the book is about, which is the kiss of death. Additionally, you don't want to give too much background introducing your characters because you're using up valuable query space where you should be talking about plot! I think above four names makes my head swim a little, but any name will confuse me if not properly introduced.
Should writers sweat the title of their book (and character names) or is that something that is often changed by publishers?
Don't sweat it. Titles get changed all the time (and names too, although less so), but that doesn't mean you shouldn't be deliberate with them. Certain names (like Bella) are going to have certain connotations, and you should be very aware of this.
How many queries do you receive in a week? How many requests might you make out of those?
I get anywhere from 5-20 queries in a day, so my weekly count varies quite a bit. I always have more requests after competitions and events, but in general I don't usually request partials from more than 15% of the slush pile.
Many agents say they don't care if writers are active online. Could a twitter account or blog presence by a writer tip the scales in getting a request or offer? And do you require writers you sign to start one?
I most definitely care if writers are active online! It sets up a great platform for them to interact with future fans, and I've also noticed that authors who are more active in the writing community are better and more knowledgeable at what they do, because they have amazing built-in resources. A good media presence will always make you look better, and it makes my job easier. I also require Twitter. I prefer an author to have a blog, but it's not necessary if they're available on other platforms.
Some writers have asked about including links to their blogs or manuscript-related artwork. I’m sure it’s not appropriate to add those links in a query, but are links in an email signature offensive?
I don't find them offensive, but there's a 99.9% chance I won't click on them. I only check those sort of things out if I'm about to make The Call.
If a writer makes changes to their manuscript due to feedback should they resend the query or only if material was requested?
I only rarely send R&Rs, but I'm usually open to receiving an updated query IF the author asks me permission first.
What bio should an author with no publishing credits include?
Their social media presence, any writing classes/experience, and group memberships!
What does ‘just not right mean for me’ mean to you?
My agency runs on a more boutique model, which means that we're very, very selective about books we rep. All three of us have quickly rejected books with amazing earning potential without looking back because none of us were in love. I need to be obsesses with the books I represent. I need to read it and then have the thought, "Wow, that was an amazing line." I need to feel the MC's feelings in the pit of my stomach, and salivate over the next book an author is writing. So many books I reject as an agent that I would really enjoy as a reader, but just don't have that "it" factor for me. Books are also not right for me if they're outside of my categories enough so that I wouldn't know how to sell it/who to give it to.
What themes are you sick of seeing?
Angels. The Chosen One. A romance where a strong man heals a virginal, broken woman. Love triangles. Treasure hunts.
Do you consider yourself a hands-on, editorial type of agent?
My background is as an editor (I still work as one, too!), so I'm definitely editorial. I go through edits and development with all my authors.
What’s the strangest/funniest thing you’ve seen in a query?
Oh man. I have SO MANY, but if I had to pick a favorite … We got a graphic novel about a sentient penis once. It was hilarious.
What three things are at the top of your submission wish list?
Dark, gritty contemporary YA that isn't a romance,
Character-driven multiple POV contemporary adult romance with a fair bit of steam,
Lighter sci-fi with a kick-ass female lead.
What are some of your favorite movies or books to give us an idea of your tastes?
I live for the wit and consequences in Buffy the Vampire Slayer, the irreverent-yet-serious tone of Doctor Who and Eureka. The delicate plotting of the Parasol Protectorate, the gorgeous scenery of A Soldier of the Great War, the gut-wrenching payoff of S.E. Hinton and
Ellen Hopkins. 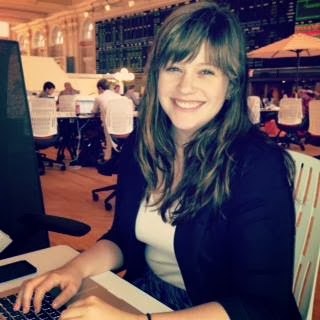 Laura Zats graduated from Grinnell College with degrees in English and anthropology. While completing her studies, she took advantage of her love of Young Adult (YA) literature and wrote a thesis on identity formation in YA. She’s been working as an editor since 2011 and has held positions at companies in both the US and the UK. In 2013, Laura joined Team Red Sofa as an intern but quickly became more of an apprentice, leveling up to Associate Agent in the same year.
Even though she loved YA books first, titles that are Middle Grade, romance, and Sci-fi/Fantasy have been slowly taking hold. Picking a favorite genre now would be like choosing between puppies and kittens. In her free time, Laura likes to craft, swing dance, bake, and binge on Netflix marathons of Buffy the Vampire Slayer and Doctor Who.