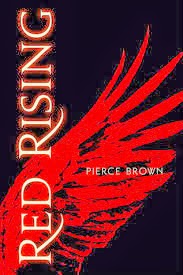 Darrow is a Red, a member of the lowest caste in the color-coded society of the future. Like his fellow Reds, he works all day, believing that he and his people are making the surface of Mars livable for future generations. Yet he spends his life willingly, knowing that his blood and sweat will one day result in a better world for his children. But Darrow and his kind have been betrayed. Soon he discovers that humanity reached the surface generations ago. Vast cities and sprawling parks spread across the planet. Darrow—and Reds like him—are nothing more than slaves to a decadent ruling class. Inspired by a longing for justice, and driven by the memory of lost love, Darrow sacrifices everything to infiltrate the legendary Institute, a proving ground for the dominant Gold caste, where the next generation of humanity’s overlords struggle for power.  He will be forced to compete for his life and the very future of civilization against the best and most brutal of Society’s ruling class. There, he will stop at nothing to bring down his enemies . . . even if it means he has to become one of them to do so.

I received a copy of Red Rising from Net Galley in exchange for an honest review.

If you like a story with loads of action, then this is your book. Once it gets going, Red Rising is a nonstop thrill ride of events, dialogue, and twists and turns. There is very little sitting still happening in this story line.

Promised as a mash up of Ender’s Game and The Hunger Games, Red Rising lives up to that challenge in its world building. Set on Mars and full of futuristic elements, it lives up to its billing by setting up a complete society with plenty of cruelty and repression for the folks born into the Reds. The ruling Golds become a perfect example of villains.

I should warn that there is a lot of violence in this book and it might not be a good fit for younger readers. Animals are killed in large numbers as well as human beings. The main character, Darrow, often seems to favor violence purely for the sake of violence. There is little lightening of the killing with regret for its necessity.

The writing is done in a minimalistic style. Descriptions of settings and characters are done in a few bold strokes. For the settings, that was more than enough to ground me in the action. The limited description let my imagination take control of picturing the world and that worked well for me.

The driving force behind Darrow is the loss of his wife, yet I never developed sympathy for her. Though I tried to get attached to her and Darrow, I couldn’t lose myself in his cause.  I did come to have respect for Darrow as he turned the corner and found enlightenment and purpose in his own journey.