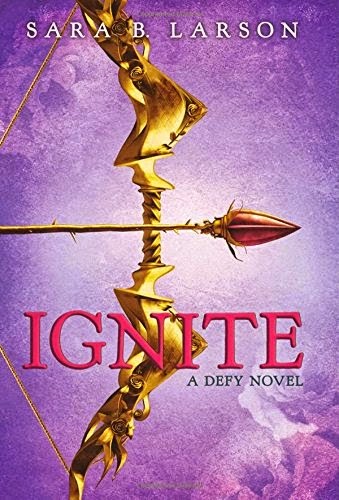 In the kingdom of Antion, peace has at long last been restored. Now that King Hector's reign of terror is over, the newly crowned King Damian, along with his most trusted guard, Alexa, must focus on rebuilding Antion and reclaiming the hope of their people. But the wounds of the past are no as easily mended as Alexa and Damian had hoped. And to further complicate matters, Alexa still harbors a secret love for Damian, a love she refuses to acknowledge for the sake of Antion, and for the sake of the king himself.
When new threats to the kingdom surface--including an assassination attempt on Damian--blame is cast on the once-friendly nation of Blevon. Alexa knows things are not what they seem, however, and once again the fate of her country hangs in the balance. Will Alexa be able to protect her king and find the true enemy before it's too late?


If you're a fan of the first book by Sara B. Larson you'd better hustle over to the Writer Diaries and enter to win an ARC of Ignite. I did a review there with my friend Tawney.
Posted by Michelle 4 Laughs at 9:25 AM

Email ThisBlogThis!Share to TwitterShare to FacebookShare to Pinterest
Labels: giveaway