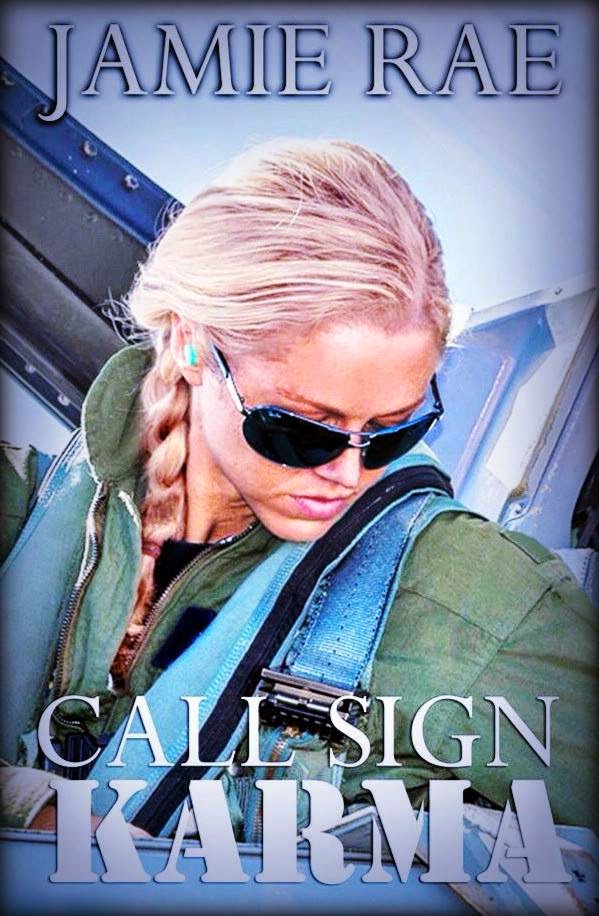 Love in the no-fly zone…

Distraught over the loss of her brother in a fighter jet accident, Tinklee Pinkerton decides to follow in his footsteps—and prove the tragedy wasn’t his fault. But when she’s chosen as the first woman to fly the Air Force’s F-35, her plan for a life that revolves around work is thrown off course by a handsome, mysterious stranger…

Thanks to Locke’s seductive British accent, sweet nature, and one too many beers, Tink is soon inspired to throw caution to the wind—and herself into his arms. She thinks maybe love can heal after all—until she discovers Locke is her superior officer. Tink has no problem risking her life in the air, but with everything on the line, is she brave enough to risk her heart on the ground?

5 Things you may not know about Call Sign Karma


1. Tink is a twenty-two year old, strong female heroine who is a student in flight school.
What drew you to write in the new adult genre?

I was already following a lot of New Adult authors and reading their novels. I loved the risks they took, trying something new and writing about an age group underrepresented in publishing. My own “new adult” years were exciting and challenging, and I was eager to explore writing in the genre. An idea came to me, about a female fighter pilot who was in flight school, sort of a modern day Top Gun with a unique twist.

2. In Call Sign Karma, Tink falls in love with her superior officer.
What were some challenges of writing a romance where both characters are in the military.

With both members being in the military, there were certain lines that couldn’t be crossed in order to keep the story realistic. Also the characters are supposed to be professional, disciplined men and women who are expected to follow orders and compartmentalize their emotions to focus on the mission, so at times it was difficult to keep the characters from reacting with raw emotion. Thankfully, Tink and some of her squadron members don’t always play by the rules. ;-)

3. Tink flies the F-35 Joint Strike Fighter in the book.
How did you research the Air Force’s newest jet?

My husband is an active duty fighter pilot so I relied on his expertise, knowledge and personal experiences. I talked to other pilots, photographers, and studied media coverage of the plane. I also had the opportunity to see the plane in real life.

4. Like the heroine, I served in the military.
How did you draw from some of these experiences when you wrote the book?

I lived and experienced first-hand life in the military so a lot of the story is fairly accurate of how life can be in the military. There was one section of the story where my editor asked if would it be realistic for them to have alcohol in a squadron bar. I had to chuckle, knowing that it was one of the most realistic aspects of the story. Also, the military offers a lot of camaraderie that I hope is well-depicted in the story. Some of my closest friends, I made while serving.

5. Call Sign Karma is a stand-alone novel but intended to be part of a three book series.
Who was your favorite character to write? Why?

I spent so much time with Tink, that of course, I love her. So I’m going to disqualify her from the running and say Ash. I really had fun writing his character. He has a boyish charm, quick-wit and he’s an all-around stand-up guy. It also doesn’t hurt that he’s super hot and Special Forces. I’m currently working on his story.

JAMIE RAE is a New Adult and Young Adult author. She writes with one goal in mind - to create stories with a positive message that will stay with the reader long after they've finished reading.

Jamie is an avid reader and loves discovering stories with a great hook. She will not eat, sleep, or speak until she reaches the end. The Harry Potter years weren't pretty! Convinced that her Hogwarts letter was lost in the mail, she keeps a watchful eye for owls hoping her children will have better luck.

In her other life, Jamie Rae creates smiles to last a lifetime as an orthodontist, keeps her heart overflowing with love as a mother of three and has perfected the art of nomadic living as a military spouse and Air Force veteran. Jamie has a passion for critters of all shapes and sizes and you can often find her sneaking them into her own home or volunteering for rescues.