Today's agent is Lane Heymont now with the Tobias Literary Agency. Lane represents the genres near and dear to my heart: fantasy and science fiction!

I hear this question from aspiring authors a lot. Short answer is a “no”. Long answer is a “kind of”. Querying an agent on Christmas — me in particular — doesn’t leave a bad taste in the mouth, but keep in mind you may have to wait a little longer to hear back than if you queried in March. I have family obligations, vacations, and holiday events. So, no there is no “bad” time of the year to query me, but there are down times when you should expect a longer response time.

Not at all. Everyone makes mistakes. Myself included. You should strive to make your query as perfect and grammatically accurate as possible, but spelling ‘here’ ‘her’ isn’t going to ruin a great query and even better story telling. However, you should at least be able to spell my name correctly — it’s only four letters — and know that I’m a man.

You could send me the worst query in the multiverse and I’ll still read your sample pages. Why? Because, some people just can’t write queries. In school I was a horrible test taker. I knew the right answers, but I sure couldn’t write them down. If your writing and story telling draws me in and grabs my awe I’m going to request more.

I don’t have an assistant as of yet. I will be on the hunt for one soon, but as of now I read all queries. I doubt this will change in the future, and if so, I’ll keep everyone updated.

Actually, I do. A query is read several times before I make any kind of decision. Each is considered seriously.

If there is a prologue then YES! Please send it along with the first five pages. I want to see it all.

It’s not the most important thing to put in your query, but it would be incredibly helpful. Comparative titles give me an idea of what I’m reading or should expect in tone or plot.

I pass queries along to other agents at The Seymour Agency all the time. If a manuscript isn’t for me and I think someone else might enjoy it I send it right over. I’ve also received a number of queries from agency sibs who pass on a piece, but think I might enjoy it.

Point blank, I want to hear about the manuscript. If you read an interview with me about what I’m looking for and think you have it, sure, let me know. Otherwise, give me goal, motivation, and conflict!

Most agents have said they don't care whether the word count/genre sentence comes first or last. But is it a red flag if one component is not included?

I don’t care where word count and genre is in your query as long as it is in there somewhere. This should be obvious, but if I don’t know your word count, how can I know if your manuscript is too long or too short to be salable? The same with genre. I need to know what to expect when I’m reading the first few pages of a manuscript. Dragons? Fairies? Aliens?

Actually, yes I do. You might have a few point-of-view characters, but keep your query short and clear. Try to focus on one or two —three is a huge stretch — protagonists. Anymore than that is just too confusing for my little head to handle.

Titles and character names can change easily when it comes to publication time. Titles most of all. The idea is to think of a catchy title that expresses both the tone and plot of your story. Using one of the five senses is also a good idea. They tend to create a stronger image in the reader’s mind. Character names don’t bother me so much as long as they make sense for the story itself. Weird spelling is fine … just not the bartender named Chj8-Kilvx.

An online presence is more important for non-fiction authors. They need a platform, and nowadays that’s most often online. For aspiring novelists, the lack of activity on social media won’t tip the scale in any way. It’s good to be online and building a platform/connection with potential readers, but that can always come later. I’m more interested in great stories and writing that haunts my dreams — in a good way!

I don’t require authors to start using social media, but I do strongly suggest it. Why miss out on such an amazing way to connect with readers? They are the most important part of this industry, literally giving it its breath!

Some writers have asked about including links to their blogs or manuscript-related artwork. I'm sure it's not appropriate to add those links in a query, but are links in an email signature offensive?

To be honest, I don’t find links in signatures offensive. It’s the cheap, spam-y feeling of putting links in queries that leaves a sour taste in my mouth. Of course, I don’t want to see five links all written out in long form. Use hyperlinks, but don’t go nuts with them.

Only if I requested the material.

An interesting tidbit about yourself. Your education and work experience should suffice. Maybe where you live. Authors often put their family’s names or their last vacation. That’s nice, but doesn’t tell me anything and is wasted space in what should be a very concise letter.

What does 'just not right mean for me' mean to you?

It just didn’t catch my interest. It could be the best writing ever, but if I don’t fall in love, how can I champion it?

Absolutely! I started out as an assistant editing and critiquing client material, and that’s where I excelled. I won’t send out anything I don’t think is ready.

What's the strangest/funniest thing you've seen in a query?

The strangest query wasn’t a query. Basically, a scientologist pamphlet.

Weird science fiction in the vein of H.P. Lovecraft, Frankenstein, or the X-Files.

Realistic fantasy where real-world problems are front and center. Think Game of Thrones or the Dragonlance Saga.

As a huge science nerd, I’d love to see some scientific non-fiction. Astrobiology, archaeology, any of the –ologies really.

My favorite book of all time is Mary Shelley’s Frankenstein. I also read H.P. Lovecraft and Margaret Weis and Tracy Hickman. Some of my favorite movies include Avatar, Season of the Witch, Event Horizon, Star Wars, and WGN’s new Salem series. For non-fiction, I read a lot of books on physics and other sciences. 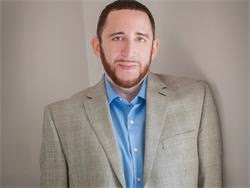 As Literary Assistant at the Seymour Agency, Lane led the marketing efforts for their authors and enjoyed connecting clients with readers. As a lover of literature since childhood, and at the prodding of his mentor Nicole Resciniti, he decided to pursue his passion as a literary agent. He went on to help found The Tobias Literary Agency. He strives to bring incredible and thought-provoking books to the masses, culminating in reaching the Top Ten on Publishers Marketplace for agents in the romance genre. With a bachelor's degree in Psychology, business and literature, Lane continued his education in Creative Writing and English at Harvard. Lane represents a broad range of commercial fiction including romance and all its sub-genres, fantasy, science fiction, nonfiction, and true crime.
Lane is a member of the Romance Writers of America and the Association of Authors' Representatives. He believes what John Gregory Dunne said: “Writing is manual labor of the mind.”
Posted by Michelle 4 Laughs at 7:00 AM