Contest naysayers, here's your proof. Though not a direct success due to Query Kombat, I think we can all allow that the contest played a big part in helping Melissa Grey with her wonderful entry for Burrito Thief. Now she has an agent and a book deal!

All three Query Kombat hosts are so happy for her. Here's Melissa's story in her own words: 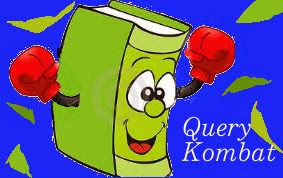 Querying is hard. And if you don’t think that querying is an intensely difficult process (emotionally, spiritually, grammatically), then there is a very good chance you’re doing it wrong. Or you’re extremely lucky, but let’s be honest ... the former is far more likely.

When I finally reached the point where I felt that my book (now titled FEATHERS AND FLAME, coming from Delacorte/Random House in spring 2015) was ready to be seen by agents, I had completed seven distinct drafts of the manuscript. By the time I had the same level of confidence in my query letter, I’d written over a dozen very different versions of it. The query letter is your first impression with agents, and I knew that if I lost their interest before they’d even reached my sample pages, I was already sunk.

When I learned about Query Kombat on Twitter, I’d just about run out of friends with fresh eyes that I could assault with my letter. Armed with draft #12 and a nifty nickname for my manuscript (Burrito Thief), I submitted my entry, feeling like I had it in the bag. I’d done well in other contests and I assumed I was on a roller coaster that only went up.

Oh, what a sweet summer child I was.

While I did make it into the first round of Query Kombat, I advanced no further. I was knocked out of the competition by a cleverly crafted pitch that snagged the audience’s imagination in a way that mine hadn’t. Draft #12 wasn’t nearly as strong as I believed it to be. I was disappointed, but not dejected.

You see, the point of a competition like Query Kombat isn’t winning. It’s improving.

My query letter was critiqued by well over a dozen people with varying levels of experience in publishing. Certain complaints popped up more than once, which should be a massive red flag to any writer, while other comments proved less than helpful (it must be said that not all feedback is worthwhile). Notes in hand, I attacked draft #12 with a stunning ferocity. I hacked away at the words until they began to resemble something coherent. Something intriguing. Something you could read on the back cover of a book. And then I kept hacking away at them some more. And when all was said and done, I held up draft #13 like Rafiki cradling a baby Simba. It was done.

I took my new and improved query letter into the trenches and within a month, I had six offers of representation to my name. And in every conversation I had with potential agents, the strength of the query letter was mentioned. If it hadn’t been for Query Kombat, let me tell you, that letter would have been a hot mess. In August, I signed with the wonderful Catherine Drayton of InkWell Management, and by the end of September, FEATHERS AND FLAME had gone to auction (if you think waiting to hear back on query letters is bad, just wait until you’re out on submission).

So, next time Query Kombat rolls around, if you’re laboring over your own letter, I strongly encourage you to enter. Honestly, I cannot recommend it enough. You and your query writing skills will be so much better for it. And remember, it isn’t about the thrill of victory. It’s about the (occasional agony) of improving.

Melissa Grey is a writer, teapot collector, and scented candle enthusiast. To read more about her path to publication or listen to her ramble on about The Golden Girls and caramel squares, head on over to Twitter (@meligrey) or Tumblr (http://www.melissa-grey.com).