Cover Reveal for THE MACHINERY 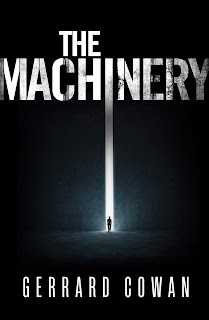 For ten millennia, the leaders of the Overland have been Selected by the Machinery, an omnipotent machine gifted to their world in darker days.

The city has thrived in arts, science and war, crushing all enemies and expanding to encompass the entire Plateau.

But the Overland is not at ease, for the Machinery came with a prophecy: it will break in the 10,000th year, Selecting just one leader who will bring ruin to the world. And with the death of Strategist Kane, a Selection is set to occur…

For Apprentice Watcher Katrina Paprissi, the date has special significance. Life hasn’t been the same since she witnessed the kidnapping of her brother Alexander, the only person on the Plateau who knew the meaning of the prophecy.

When the opportunity arises to find her brother, Katrina must travel into the depths of the Underland, the home of the Machinery, to confront the Operator himself and discover just what makes the world work…

Gerrard Cowan hails from Derry, in the North West of Ireland, and works as a News Editor at The Wall Street Journal. His first known work was a collection of poems on monsters, written for Halloween when he was eight; it is sadly lost to civilisation. He lives in South East London with his wife Sarah, son Finn and daughter Evie. He can be found on Twitter @
GerrardCowan