I'm happy to welcome Noah Ballard from Curtis Brown to Query Questions. Here's what he has to say about his query slush.


Is there a better or worse time of year to query?

Summer is better, but really any time is good. My schedule is dictated by the work of my clients. It’s worse to send things at the end of academic semesters because that’s when all the professors start turning in their drafts.

Sometimes, yes. The query is evidence that you’re a professional. If you can’t proofread, that’s a red flag for agents.

Not always. But people can hook me a lot easier than they think. I think a lot of writers over-write their synopses. All I want to know is Who is this about, Where is it set, What’s the conflict. If I like the gist of the synopsis, I stop reading and go to the pages.

No. I do have interns, but I like reading my queries personally.

Yes. I let the Maybes marinate for a few days or even weeks sometimes.

Yes. I want to interact with the book the way a reader would picking it up at the bookstore. If the prologue can be cut and you’ll still enjoy the book, maybe it doesn’t need a prologue.

Coming up with comps is ultimately my job to prove to an editor how many copies a book will sell, so I don’t expect an author to do that. But it’s good to see who the author is reading, who they are in conversation with and gauge their understanding of the marketplace.

One agent per agency at a time is a good practice. As most large agencies, typically each agent has a niche, so researching accordingly is important. But I will hand things off if I think they’re more suited for someone else.

I like to know why the person is querying me.

Most agents have said they don’t care whether the word count/genre sentence comes first or last. But is it a red flag if one component is not included?

In a good synopsis, the author should be able to identify their genre and include their word count. I want to know what I’m getting into. For example, I get “novels” all the time that are “completed” at 25,000 words. Barring some exceptions, publishers want a debut novel to be between 60,000-100,000 words.

I wouldn’t worry about how many characters someone names. However, a synopsis should only be four to five sentences and tell us the basic premise of the book. Keep it simple.

Definitely sweat it when querying. Titles are important—they are the first impression of the book. Yes, publishers (and agents) often change titles, but first impressions last.

Being a good literary citizen means communicating with the community. Social media is a great way to do that, and it shows you’re savvy when it comes time to market the book. It’s not a deal-breaker, but it’s not insignificant.

Links to an author’s homepage (if it’s professionally built) is a good sign of business savvy. But, if it looks bad, it definitely makes a bad impression.

Query slowly. It’s a pet peeve of mine when people rescind and resubmit edited manuscripts—it’s someone else’s notes. If an agent is into the book, they’ll sign it and edit. But making quick changes to address passes is not a good move. Make sure a book is done-done before sending it out and then stand by it until that round of querying is over.

Your bio is your CV. If you have nothing to include—no publication credits, no schooling, no writer/publishing contacts, then you’re probably not ready for an agent. A writer is a job like anything else—you need to build your resume.

An author-agent relationship is a lot like dating: Sometimes I fall head over heels for a writer that’s great for me, sometimes I fall for someone who is going to hurt me in the end, and sometimes I don’t fall in love—even though I know they’re a perfectly good writer. But, like dating, you don’t want to be with someone who doesn’t love you, so don’t be too sad if you get that response. It means I see your talent, but the vision for how to represent you wasn’t there.

Not a theme, but a genre: broken cop with dead wife, daughter, etc. must exact vengeance on ISIS, the Cartel, serial killer from his past etc. and face his demons.

Yes. I edit a lot before I send something out. And I warn my clients of this before signing with me.

What’s the strangest/funniest thing you’ve seen in a query?

Someone one once opened his query asking if I was afraid of being too successful. (Yes.) Another person responded to my pass by calling me a cock.

I just reread Jurassic Park. What a great book—and somewhat questionable politics. If there are any writers out there with an idea that simple (let’s bring back dinosaurs) with the chops to pull it off (a background in Chaos Theory), please let me know. 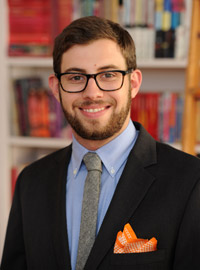 Noah Ballard is an agent at Curtis Brown, Ltd. He received his BA in English from the University of Nebraska–Lincoln, and began his career in publishing at Emma Sweeney Agency where he sold foreign rights for the agency in addition to building his own client list. Noah specializes in literary debuts, upmarket thrillers and narrative nonfiction, and he is always on the look-out for honest and provocative new writers. Noah has appeared across the country at graduate programs and writing conferences speaking about query letters, building nonfiction platforms and submission etiquette. He lives in Brooklyn.