Behind the Scenes: Thereafter Cover Art 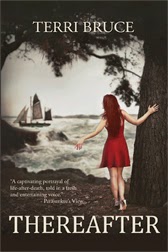 Nothing in life is free. Turns out, nothing in the afterlife is, either.
When recently-deceased Irene Dunphy decided to “follow the light,” she thought she’d end up in Heaven or Hell and her journey would be over.
Boy, was she wrong.
She soon finds that “the other side” isn’t a final destination but a kind of purgatory where billions of spirits are stuck, with no way to move forward or back. Even worse, deranged phantoms known as “Hungry Ghosts” stalk the dead, intent on destroying them. The only way out is for Irene to forget her life on earth—including the boy who risked everything to help her cross over—which she’s not about to do.
As Irene desperately searches for an alternative, help unexpectedly comes in the unlikeliest of forms: a twelfth-century Spanish knight and a nineteenth-century American cowboy. Even more surprising, one offers a chance for redemption; the other, love. Unfortunately, she won’t be able to have either if she can’t find a way to escape the hellish limbo where they’re all trapped.
Cover Art, Marketing, and You

Hi everyone! Did you know that today is the first day of Lemuria or Lemuralia—an ancient Roman festival to placate and exorcise the restless dead? Make sure you follow the traditional rituals to drive out evil spirits that may try to take up residence in your home! J

I’m thrilled to be here today, talking about the cover art and marketing of Thereafter, the second novel in my Afterlife series. I’ve had the unique experience of being able to redesign my book covers/re-issue my books with different covers—and not just with different covers but with covers that convey a completely different genre/feel of my books—and I wanted to share with you a bit of what I’ve learned from this.

Originally, my first and second books (Hereafter and Thereafter) were published with a publisher, which means I had very little input into the covers. When I received the cover art for the first book, I was over the moon. It was beautiful. I loved it to death. It was bright, it was vivid, it was eye catching, and it captured the main highlights of the book (sexy red-haired chick, city of Boston in the background, ghostly glow around the woman). However, I wasn’t sure it fit the genre of my book.

Book covers are the primary marketing tool of any book; they don’t have to just grab readers’ attention, but they also subtlety convey a lot of information about the quality of the book (low quality cover suggests low quality editing and writing), the genre of the book, and the overall tone of the book. Chick lit book covers tend to be drawn and have a kitschy/cartoony feel. Women’s fiction and literary fiction tend to feature photographs of people, usually with their heads out of frame/cut off (why is that?). Mysteries and thrillers usually have dark covers, featuring a gun, a policy badge, a bomb, a dagger, or some other weapon. Et cetera. Et cetera.

If you’re an author, it behooves you to spend some time scrolling through book blogs, just to look at covers. Check out blogs that specialize in a particular genre or two and then scroll through all their book posts (book hauls, reviews, and spotlights) to get a feel for the cover conventions of that genre. I had spent a lot of time doing just this when I got the cover art for the first edition of Hereafter so I was pretty familiar with the different genres’ covers’ look and feel; looking at the Hereafter artwork, I felt that it had an urban fantasy vibe, which worried me, because my story wasn’t urban fantasy. However, the books are hard to classify—they are a combination of women’s fiction, literary fiction, and contemporary fantasy. It’s hard to convey all that in a cover. Sometimes you just have to pick one genre and go with it. So I went with it.

It turns out I was right—people assumed the first edition of Hereafter was urban fantasy, or, at the very least, it drew a lot of urban fantasy fans. But this wasn’t a bad thing. Many urban fantasy readers cross genres, enjoying paranormal romance, chick lit, general fantasy, and literary fiction with fantasy elements (like The Time Traveler’s Wife and The Lovely Bones). So for every person that went, “Um, this was advertised as urban fantasy and it really isn’t,” there was another person who went, “Not what I expected, but I loved it!” So I wasn’t unhappy with the original cover, but I was aware that it didn’t quite fit the book.

When it came time for me to re-release the books under my own imprint, I knew I wanted covers that more accurately reflected the books’ women’s/literary fiction with fantasy elements content, getting completely away from a paranormal romance and urban fantasy feel. But I also knew this meant my marketing was going to take a hit. I was going to lose the market segment that had been drawn to the old cover’s urban fantasy vibe. I agonized over this decision for quite a while—did I want to keep going after readers who happened to like my book despite the fact that it wasn’t what they expected (the people who thought they were getting urban fantasy but ended up getting something else) or did I want to go after readers who were purposely looking for the type of book Hereafter is? Ultimately, I decided on the latter; It just didn’t feel right to be advertising the book as something it’s not—it’s not a plot-driven, action-adventure story featuring a kick-ass heroine. It’s a slow, thoughtful, character-driven story and I wanted the cover to show that.

I spent a lot of time trying to figure out what style I wanted the new covers to be in—more women’s fiction or more fantasy? When I saw Shelby Robinson’s artwork, I knew the answer was, “BOTH!” What drew me to her art is that it looks almost like a painting. Not quite a photograph, not quite a painting. They are somewhere in between, just like Hereafter and Thereafter—not quite fantasy, not quite literary fiction. Her work also has a unique mix of whimsy and melancholy, realism and fantasy, also exactly like my books. The first comment everyone made when they saw the new cover of Hereafter was that it fit the book much better than the old cover, which is what I wanted. Yes, the old cover was gorgeous and eye catching, but it also seemed to make a promise it couldn’t keep: “Read me—I’m urban fantasy!” The new covers definitely say something very different. 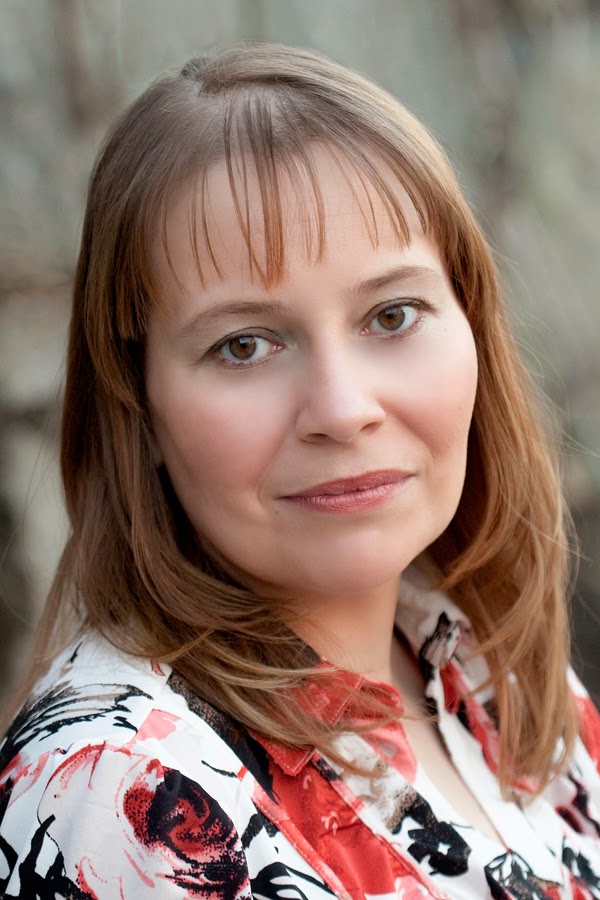 Author Bio
Terri Bruce has been making up adventure stories for as long as she can remember and won her first writing award when she was twelve. Like Anne Shirley, she prefers to make people cry rather than laugh, but is happy if she can do either. She produces fantasy and adventure stories from a haunted house in New England where she lives with her husband and three cats.
Email:      tbruce@terribruce.net
Website/Blog:     www.terribruce.net
Goodreads:    www.goodreads.com/TerriBruce
Facebook:     http://www.facebook.com/authorterribruce
Twitter:     @_TerriBruce
Book Buy Links (available at all major book retailers)
Amazon - http://www.amazon.com/Thereafter-Afterlife-Series-Volume/dp/0991303628/ref=sr_1_2?ie=UTF8
Barnes & Noble - http://www.barnesandnoble.com/w/thereafter-terri-bruce/1115324247?ean=2940149344697
Smashwords: https://www.smashwords.com/books/view/423765
Posted by Michelle 4 Laughs at 7:00 AM