Getting the Submission Call from Jeri Baird

Serendipity, fate, or coincidence? What do you believe when a series of events happens so easily it could only be a "meant to happen" moment? This is what I asked myself when the offer for publication came. But the years leading up to that day were not so quick and certainly not easy.

I'd been writing off and on for seven years when the idea for Tokens and Omens came. I opened a new journal and began the young adult fantasy in November of 2011.  In 2012, I moved to Colorado with my husband. For the first time in years, I didn't work. I gave myself a year to revise, polish, and get an agent. I thought dedicating myself to writing for one year would be enough time. (cue the laughter) I took an online class with Sarah Aronson, joined two online critique groups, and started to query a middle grade novel. A year went by without an offer, so I finagled another year of not working. I revised three manuscripts, entered contests, pitched on Twitter, and had a fair amount of requests, but no agent.

I started to query Tokens and Omens in May of 2013 and soon decided it wasn't ready. Back to revisions. It was another year before I queried Tokens and Omens again. I had a few requests, but no offers.

I sought professional help with my queries. I attended the 2013 SCBWI Conference in LA, where I met two of my online critique partners, Tina Brockett and Robin Korb and ran into a writer I'd met at an Illinois SCBWI weekend retreat, Anny Rusk. The four of us hung out and had a great time attending the sessions and fan-girling.

I made writing friends on twitter and entered more contests. Two and a half years flew by with twenty revisions on Tokens and Omens and thirty-one queries resulting in two partial requests, two fulls, and one that asked to see future work. Altogether, I had 123 rejections from four manuscripts.

In February 2015 I was at my lowest point as an author. I wanted to quit. Anny threatened to steal my idea if I gave up on Tokens and Omens (she was kidding!). Tina encouraged me daily. Robin commiserated, while also receiving rejections. As much as it seemed hopeless of ever seeing my book in print, something wouldn't let me quit.

On February 20, 2015, I saw that Jolly Fish Press was having their own twitter pitch. I thought it couldn't hurt. Here's what I pitched:

Fate whispers in one ear, Puck's ghost in the other. Zander must choose to follow his dream as a King's Bow or save his village  #JFPitch

I had requests from two of the Jolly Fish editors, and on March 13, Reece Hanzon requested the full.

THE CALL: On April 2nd, I was visiting my sons in Wyoming. My phone ringer was turned off. When I noticed the missed call, I listened to the 22 second message. Reece wanted to talk to me about my manuscript. Yes, I still have it on my phone! I did a little freak-out, wrote out a few questions, and closed myself up in the bedroom to call. It went to voice-mail, but within minutes, Reece called me back. We chatted about the book, and he offered a contract for two books. I'd recently sent out some queries, so I contacted the agents and withdrew the book. I'd already done my research on Jolly Fish Press, but I did email with one of their authors before deciding. I signed the contract on April 13.

In Tokens and Omens, Fate interferes in the lives of the Puck's Gulch villagers. Zander believes she has his best interests at heart, while Alexa trusts only herself and schemes to control her own destiny.

They discover that neither belief is the truth.

I found that Jolly Fish Press came into existence on November 2011, the same month and year I started writing Tokens and Omens. I like to think of Fate working behind the scenes to bring us together. In February I wanted to quit, in April I had a two-book contract. When it was meant to happen, it was smooth, it was easy, it was right.

TOKENS AND OMENS releases on July 19. That same day, my husband and I are leaving on a six day motorcycle trip. I'm calling it the 5 State, 2 Wheel, 100 Tokens and Omens book tour. I've painted stones with charms depicting the tokens and omens in the book, and while I'm leaving them throughout the states of Colorado, Wyoming, Montana, Idaho, and Utah, my street team is placing them in thirty other states. More info is on my website:  jeribaird.com You can follow my trip on twitter @jeribaird11 or on Facebook at https://www.facebook.com/jeribaird11/?ref=aymt_homepage_panel 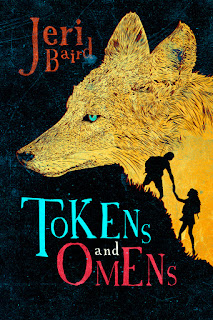 In Puck's Gulch, sixteen-year-olds undergo a dangerous trial known as the Quest. During a time of magic, Fate hands out tokens and omens based on their behavior. The teens survive the quest only by earning the tokens that will counteract the potentially lethal omens.

After Zander and Alexa each earn a black panther omen that makes surviving the quest nearly impossible, they must break the rules and challenge Fate together. If they don't, one will die. Fate has made it clear – she won't be cheated.

Before becoming an author, Jeri Baird worked as a handmade paper artist, an entrepreneurship teacher for at-risk high school students, a reflexologist, a rock painter, and a zombie (in a film, not a real one).

She lives on the Western Slope of Colorado with her husband and cat, who both make her laugh. When she’s not writing, she enjoys kayaking, the scenery from the back of her husband’s motorcycle, and visiting her sons in Wyoming and Illinois.

https://jeribaird.com/
Posted by Michelle 4 Laughs at 8:00 AM